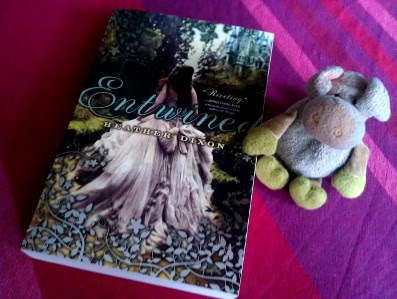 What is it about:
Azalea is trapped. Just when she should feel that everything is before her . . . beautiful gowns, dashing suitors, balls filled with dancing . . . it's taken away. All of it.

The Keeper understands. He's trapped, too, held for centuries within the walls of the palace. And so he extends an invitation.

Every night, Azalea and her eleven sisters may step through the enchanted passage in their room to dance in his silver forest.

But there is a cost.

The Keeper likes to "keep" things.

Azalea may not realize how tangled she is in his web until it is too late.

What did I think of it:
I love fairytales, so when I read that Entwined is a retelling of one of my favorite fairytales, 'The Twelve Dancing Princesses', I just had to read it.

It turned out to be an enjoyable read.

I will confess I had hoped the story would be a bit darker, a bit more seductive. When The Keeper was first introduced I was looking forward to Azalea being drawn in by his charms. That was not to be. From the start The Keeper is cast as too creepy to ever really make it believable that Azalea is even the least bit smitten by him and even for those unfamiliar with the original fairytale it's more than obvious who Azalea will end up with.

Now usually I'm not much for love triangles and such, but this tale could have profited from a bit more duality in my opinion. The romance was tame and flat.

I did enjoy the romantic storylines for Azalea's sisters Clover and Bramble I will confess and I actually wished at times that one of them had been the lead character of the book.

I also really loved the king. He's an intriguing character and I felt for him as he was trying to (re)connect with his willful daughters.

All in all this was a very nice read with little surprises, but that's what you get with retellings of course.

Why should you read it:
It's a nice retelling of a beautiful fairytale

I never like the original fairy tale because the sisters are the real villains who let people die so they can party. They just seem sociopathic to me. This book fixed all my problems with the original and successfully fleshed out the characters and the plot.

I agree that it could have been darker and maybe having Azalea fall for the Keeper would have been a little better. Great review!

I don't think I know The Twelve Dancing Princesses tale... I'll have to look for the French title or maybe "Les douze princesses danseuses"? Well it would be a strange title. But like you I'm always curious about tales like that, even if I'm often disappointed. thanks for the discovery!

Oh the fairy retells seem to be very creative these days, and sounds like this was a good one. :) Thank you.

Thanks everyone. It was a nice read, but I wanted something a bit more sinister.