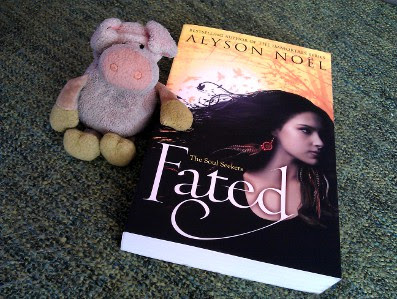 What is it about:
Lately strange things have been happening to Daire Santos. Animals follow her, crows mock her, and glowing people appear out of nowhere. Worried that Daire is having a nervous breakdown, her mother packs her off to stay in the dusty plains of Enchantment, New Mexico with a grandmother she’s never met.

There she crosses paths with Dace, a gorgeous guy with unearthly blue eyes who she’s encountered before...but only in her dreams. And she’ll get to know her grandmother—a woman who recognizes Daire’s bizarre episodes for what they are. A call to her true destiny as a Soul Seeker, one who can navigate between the worlds of the living and the dead. Her grandmother immediately begins teaching her to harness her powers—but it’s an art that must be mastered quickly. Because Dace’s brother is an evil shape-shifter who’s out to steal her powers. Now Daire must embrace her fate as a Soul Seeker and find out if Dace is one guy she’s meant to be with...or if he’s allied with the enemy she’s destined to destroy.

What did I think of it:
This was a nice enough read.

I thought Daire was a bit of a brat at first, but she quickly changed luckily enough. Of the other characters I really liked Paloma, Daire's grandmother. All other characters, with a small exception here or there, all felt very one dimensional in my opinion. They didn't feel very real.

The writing wasn't for me either. The story was written in Present Tense and not in a good way. I kept getting pulled out of the story by the writing and struggled to finish the book.

The story had a lot of potential, but didn't really deliver what I hoped for. It felt a bit uneven. First Paloma takes a long time to train Daire and to make her understand what's happening and then suddenly Daire is rushed into action. It would have been better to even things out a bit I think.

In the end this was a pleasant read, but it didn't really grab me. I don't think I'll continue reading this series.

Why should you read it:
It's a nice Paranormal YA read.

This book is on my wishlist, but I keep hearing yay and nay things about it. I'am going to give it a try, fingers crossed I will like it. :)

I totally agree. I just couldn't finish this one. It wasn't really going anywhere and the writing felt really weird. I think it had a lot of promise though.

Haven't read this one yet, but really do appreciate your honest review! Methinks I'd do well to borrow this one from the library instead of an outright purchase~

I've bought one of her books yesterday at "Boekenfestijn", with a beautiful cover. I am sorry this writingstyle is not fluent, I do hope the other series is better.

@Aurian: I think I read the first book in her Immortals series a few years ago, but can't remember how the writing was in that one.