*This review was posted before, but as now finally the print version is out as well, I decided to repost it. 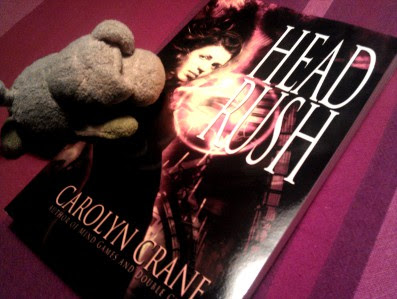 What is it about:
JUSTINE JONES FACES HER ULTIMATE ENEMY: HERSELF!

In an attempt to put her unhappy past behind her, Justine Jones throws herself into nursing school and planning her wedding to Otto Sanchez, the man of her dreams. But something is off. Random details aren’tadding up…and is it her imagination, or are her friends and fiancé keeping secrets from her? And what’s with this strange sense of unease, and her odd new headaches?

Justine tries to stay upbeat as Midcity cowers under martial law, sleepwalking cannibals, and a mysterious rash of paranormal copycat violence, but her search for answers leads her into the most dangerous mindgame yet.

With the help of unlikely allies, including her paranoid dad and best frenemy Simon, Justine fights her ultimate foe…and unravels the most startling mystery of all.

What did I think of it:
This book is utterly amazing!

Crane does it again: She made me rage, cry, chuckle, laugh and sigh in this rollercoaster ending of her Disillusionists Trilogy. There are few authors who manage to get me so involved in a lead character to actually make my blood pressure spike and heart rate increase, but so far Crane succeeded to do so with every book she wrote.

Crane's world building and her characters are both strong as ever. My favorite characters were all present again, there was a very cool new character and Carolyn even indulged me by including my beloved professor Teufelsdrockh (how awesome is that!?).

All in all this book is everything I hoped it would be and more. If you haven't started this series yet, you should run out right now to buy it! It's amazing.

Why should you read it:
It's amazingly cool and utterly awesome Urban Fantasy

lol. Carolyn is an amazing writer. :) And loved the ending to an amazing trilogy. :)

I really need to try this series as well. I have the first one so it might be soon. thanks for the review!