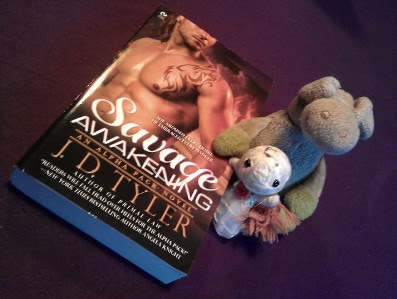 What is it about:
After one of their own is captured, the Alpha Pack must save him. With them is Psy Dreamwalker Rowan Chase. Her priority is her brother's rescue. What she doesn't bargain for is a scorching affair with a rugged wolf shifter. When his life is endangered, Rowan must ask herself what she's willing to sacrifice in the name of love.

What did Voodoo Bride think of it:
This was a bit of a disappointment.

I had hoped this would be a hot, romantic, paranormal read.

I got about one and a half out of these three.

So... The scenes between Rowan and Aric were hot, no doubt about that. But the romance was no where to be found. I really didn't get why they fell for each other and even the mate trope wasn't convincing enough in this case. It just felt like two people seriously in lust, but not in love to me.

Then there was the paranormal part of the story. Aric is a shifter and there's also some other shifters and a fairy. so far so good. Then there's Rowan, who's promoted as a Psy Dreamwalker on the back cover of the book. I was really intrigued by that and was wondering how her powers would be used.

The story around the romance/hot sex wasn't very intriguing in my opinion and I did contemplate putting the book down about halfway through. I didn't because I was curious to find out what would happen to one of the side characters and guess what:
That storyline was left open to be continued in the next book.

All in all I am not impressed by this book and won't be reading other books in this series.

Why should you read it:
It's a hot (paranormal) read

aww, better luck with your next book! thanks for the review!

That's too bad - I guess they all can't be *gems*. Then again, the guy on the cover sure has an awesome tattoo ;D

So, a hot cover, an intriguing blurb, and a disappointing story. That sucks.