An Interview with Delilah S. Dawson 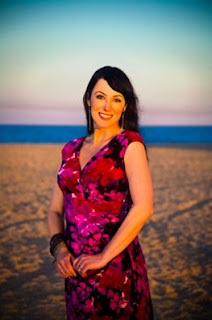 Welcome to Pearls Cast Before A McPig, Delilah.
Could you tell a bit about yourself for those people who don’t know you yet?

I'm Delilah S. Dawson, author of whimsical and dark fiction. I write the BLUD series for Pocket, including WICKED AS THEY COME, WICKED AS SHE WANTS, two e-novellas, and a story in the CARNIEPUNK anthology called THE THREE LIVES OF LYDIA. I also have a short story called FOLLOW ME BOY out with Kindle Worlds on Amazon. My first YA is out with Simon Pulse in summer 2014, a creepy paranormal about Savannah, GA called SERVANTS OF THE STORM. I love adventures, horses, cake, and more cake and spend most of my time being ridiculous on Twitter.

How many books will there be in the Blud series?

There will be three books and three e-novellas in the BLUD series. The last book is out next January and is called WICKED AFTER MIDNIGHT, and it's basically a Sangish take on Moulin Rouge. The last novella is called THE DAMSEL AND THE DAGGERMAN. I just turned in copy edits on it, and I was totally fanning myself. Forgot how hot it was!

Loosely, but more as inspirations. Casper was sparked by an intriguing stranger in one of my classes in college. The dandies at the end of WICKED AS SHE WANTS were inspired by two local steampunks I know who craft the most amazing costumes

Definitely! I always have to be working on *something*. My editor and I sat down to lunch at the RWA Nationals in Atlanta and came up with the most amazing idea for a new series. And I loved writing FOLLOW ME BOY in the world of the SHADOWMAN comics so much that I'm now going to be in a comics anthology and am hungry for more. And Tiffany Reisz helped me come up with yet another exciting idea that I hope to work on one day, but it's going to need some hands-on research, if you know what I mean. I have more ideas than time!

At the cafe, writing. Or shuttling my kids around. Or in my bed, reading. Or going trail riding on my Tennessee Walker, Polly. My favorite place to be is the beach, but I don't get there often enough. 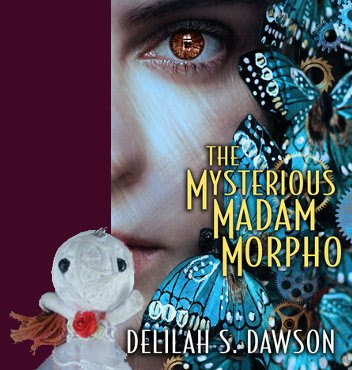 I demanded my husband take me out to a wonderful restaurant called Canoe in Atlanta where I drank champagne and ate Carolina rabbit and blushed furiously. And I used a portion of my first advance to build wall-to-wall bookshelves.

Meeting readers and other authors! I've made so many amazing friends in the publishing business and at signings and cons. I always thought of myself as an introvert--until I discovered that having a shared passion can make anyone a potential friend.

Diana Gabaldon, Jean Auel, Sara Donati, and Richard Adams all figured prominently in my growth as a reader and a writer. My favorite books recently include the Original Sinners series by Tiffany Reisz, anything by Chuck Wendig, and both of Cassandra Clare's Shadowhunter series. My writing goes in cycles that include frantic work and frantic reading, and right now, I'm frantically reading. Today, I started and finished WALLBANGER by Alice Clayton, and I'm about to pick up SEND by Patty Blount.

I actually wrote a YA zombie farce called ATTACK OF THE BATHS*T BIMBOS about a teen geek girl blogger fighting zombies made by diet soft drinks, but my agent didn't think it would sell. :) As for pigs, I'll have to put one in the next book just for you. There's a butcher in there, but I don't think that's the way to handle it. Thanks so much for having me, darling!

If the pig gets butchered I'm fine with no pigs in your books ;)
And thanks for dropping by! 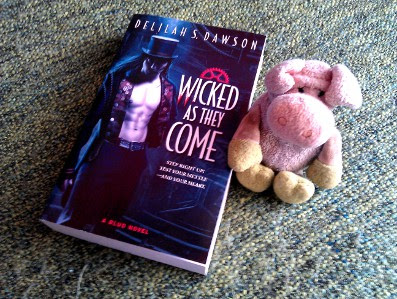 About Wicked As They Come:

First in a steampunk-tinged paranormal romance series in which a woman is transported to a world filled with vampires and magic. When nurse Tish Everett forced open the pesky but lovely locket she found at an estate sale, she had no idea she was answering the call of Criminy Stain, from the far off land of Sang. He’d cast a spell for her, but when she’s transported right to him, she’s not so sure she’s ready to be under the spell of another man. (It didn’t go so well last time with controlling, abusive, domineering Jeff.) If only Criminy wasn’t so deliciously rakish….

Half the inhabitants of Sang are Pinkies—human—and the other half are Bludmen, who in Tish’s world would be called vampires. But they don’t mess with any of the bat/coffin/no sunlight nonsense. They’re rather like you and me, just more fabulous, long living, and mostly indestructible. (They're also very good kissers.) But when the evil Mayor of Manchester (formerly Bludchester) redoubles his efforts to rid Sang of the Bludmen once and for all, stealing Tish’s locket in hopes of traveling back to her world himself for reinforcements, Criminy and Tish must battle ghosts, sea monsters, wayward submarines, a secret cabal, and thundering Bludmares to get the locket back and allow Tish to return home…but has she found love with Criminy? Could she stay in Sang forever?

I enjoyed the interview and I have to say I thought Wicked as They Come was a fantastic story. I have several other stories still to read which I'm very much looking forward to.

Wicked As They Come is buried somewhere in my TBR mountain. I really need to dig it out and read it.

Wow. That cover art is enough to get me to read it. Great interview Sullivan.

I'm yet to read any of Delilah S. Dawson's works yet. Great to meet her here thank you.

Lovely interview, thank you ladies! And no, a butchered pig is not something we want to read about ;)