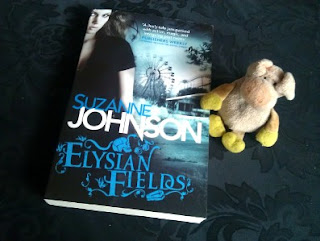 What is it about:
An undead serial killer comes for DJ in this thrilling third installment of Suzanne Johnson’s Sentinels of New Orleans series

The mer feud has been settled, but life in South Louisiana still has more twists and turns than the muddy Mississippi.

New Orleanians are under attack from a copycat killer mimicking the crimes of a 1918 serial murderer known as the Axeman of New Orleans. Thanks to a tip from the undead pirate Jean Lafitte, DJ Jaco knows the attacks aren’t random—an unknown necromancer has resurrected the original Axeman of New Orleans, and his ultimate target is a certain blonde wizard. Namely, DJ.

Combatting an undead serial killer as troubles pile up around her isn’t easy. Jake Warin’s loup-garou nature is spiraling downward, enigmatic neighbor Quince Randolph is acting weirder than ever, the Elders are insisting on lessons in elven magic from the world’s most annoying wizard, and former partner Alex Warin just turned up on DJ’s to-do list. Not to mention big maneuvers are afoot in the halls of preternatural power.

Suddenly, moving to the Beyond as Jean Lafitte’s pirate wench could be DJ’s best option.

What did I think of it:
This series just keeps getting better and better with each book.

I thought River Road was an intense read, but Elysian Fields blew me away. DJ is taking hit after hit, with almost no time to catch her breath. I was on the edge of my seat and couldn't put this book down until I finished it. It's an intense and emotional read. Again there are plenty of twists and turns and this time it wasn't so easy to figure out what was going on and why.

I loved how things that happened in River Road and that made no sense to me at the time now suddenly started making sense and how things fell together. I also was happy to see Rene return. I absolutely love him and want a best friend like that! I'm hoping he will get even more screen time in the next couple of books.

DJ makes some choices in this book that have me worried about her future I can tell you, even though I can understand why she makes them. I know I'll be rereading this series while impatiently waiting for the next book to see if my fears will become reality.

Why should you read it:
It's a very intense Urban Fantasy read.

I agree that each book in the Sentinels series has been better than the last. With Elysian Fields being the best. Gives Suzanne a challenge for books four and five. Love this series. Team D.J..

^^ you did read them quickly one after the other but having read them i understand all too well ^^ this was was really gripping ^^ and i was so surprised at teh end ( i want to see Jean revenge!)

I did. I read them both in the same weekend. Too good to wait!

Yeah, glad you loved it Sullivan. I want Rand to suffer long and hard before he dies horribly.