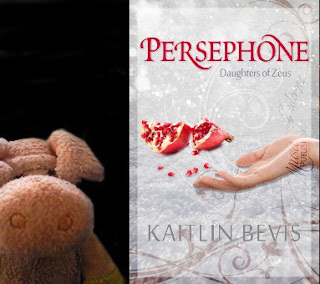 What is it about:
There are worse things than death, worse people too

The “talk” was bad enough, but how many teens get told that they’re a goddess? When her mom tells her, Persephone is sure her mother has lost her mind. It isn’t until Boreas, the god of winter, tries to abduct her that she realizes her mother was telling the truth. Hades rescues her, and in order to safely bring Persephone to the Underworld he marks her as his bride. But Boreas will stop at nothing to get Persephone. Despite her growing feelings for Hades, Persephone wants to return to the living realm. Persephone must find a way to defeat Boreas and reclaim her life.

What did I think of it:
You might know by now I love a good retelling of myths and fairytales, so when I was offered a review copy of Persephone I jumped at the chance.

And this is a very nice read.

I was a bit thrown at the start of the story. Some situations and characters were introduced that I expected to be important for the rest of the story, but then Persephone is attacked by Boreas, rescued by Hades and wisked away to the Underworld and a whole new set of characters was introduced.

Once I got over my confusion though I got into the story and started to enjoy it. I really liked Hades and Charon and some of the other characters Persephone gets introduced to in the Underworld. The way Bevis sets up the Underworld and the powers of the Gods felt believable and I enjoyed exploring the Underworld together with Persephone.

There was some suspense and action, but overall this story was sweet and focused on Persephone finding her place in the Underworld and discovering her hidden powers. All in all this is an enjoyable story. I might give the second book in this series a try to see what happens next for Persephone.

Why should you read it:
It's a nice YA retelling of the Persephone myth.


Buy it from Amazon

Hmm not sure this is for me. Glad you enjoyed it.

This is perhaps the one myth I have read in the original. I am curious to see how it plays out in a YA retelling. Thank you for sharing your thoughts with us.