A Breath of Eyre - Book Review 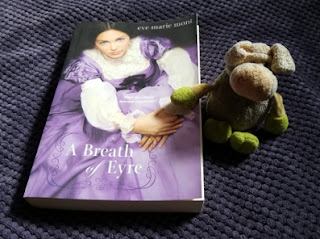 A Breath of Eyre (Unbound #1)
by Eve Marie Mont

What is it about:
Emma Townsend has always believed in stories--the ones she reads voraciously, and the ones she creates. Perhaps it's because she feels like an outsider at her exclusive prep school, or because her stepmother doesn't come close to filling the void left by her mother's death. And her only romantic prospect--apart from a crush on her English teacher--is Gray Newman, a long-time friend who just adds to Emma's confusion. But escape soon arrives in an old leather-bound copy of Jane Eyre. . .

Reading of Jane's isolation sparks a deep sense of kinship. Then fate takes things a leap further when a lightning storm catapults Emma right into Jane's body and her nineteenth-century world. As governess at Thornfield, Emma has a sense of belonging she's never known--and an attraction to the brooding Mr. Rochester. Now, moving between her two realities and uncovering secrets in both, Emma must decide whether her destiny lies in the pages of Jane's story, or in the unwritten chapters of her own. . .

What did I think of it:
This was a nice, but forgettable read for me.

The story set in the now is one that I've seen done before, and the parts where Emma finds herself in Jane Eyre's world could have been so much more. Especially her first visit is practically a rehash of the original novel.

Still it was nice enough to keep reading to see where things would lead. There were some unique twists to the story, but not enough to lift the story to the heights I had hoped for. I won't continue this series.

Why should you read it:
It's a nice Paranormalish YA read.