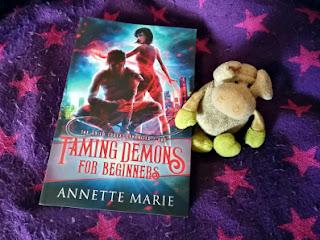 What is it about:
Rule one: Don't look at the demon.

When I arrived at my uncle's house, I expected my relatives to be like me—outcast sorcerers who don't practice magic. I was right about the sorcery, but wrong about everything else.

My uncle chose a far deadlier power. He calls creatures of darkness into our world, binds them into service contracts, and sells them to the highest bidder. And I'm supposed to act like I don't know how illegal and dangerous it is.

What did I think of it:
I love the Guild Codex: Spellbound series, so I had to try this spin-off from that series.

And this book is so much fun!

I really liked Robin: she's an introverted bookish young woman, who ends up in trouble because of her curiosity and kindheartedness. She binds herself to a demon without knowing the rules and will have to figure things out on the run, because soon all hell breaks loose.

This book is just as fun and suspenseful as the books in the Spellbound series, but Robin is a very different character than Tori is, so she gets herself in trouble in new and creative ways. I was hooked from the start and couldn't put the book down until I finished it. You bet I ordered the next book right away!

Why should you read it:
It's a fun and suspenseful Urban Fantasy read.