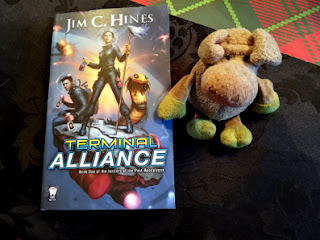 Terminal Alliance (Janitors of the Post-Apocalypse #1)
by Jim C. Hines

What is it about:
When the Krakau came to Earth, they planned to invite humanity into a growing alliance of sentient species.

This would have worked out better for all involved if they hadn’t arrived after a mutated plague wiped out half the planet, turned the rest into shambling, near-unstoppable animals, and basically destroyed human civilization. You know—your standard apocalypse.

The Krakau’s first impulse was to turn their ships around and go home. After all, it’s hard to establish diplomatic relations with mindless savages who eat your diplomats.

Their second impulse was to try to fix us.

A century later, human beings might not be what they once were, but at least they’re no longer trying to eat everyone. Mostly.

Marion “Mops” Adamopoulos is surprisingly bright (for a human). As a Lieutenant on the Earth Mercenary Corps Ship Pufferfish, she’s in charge of the Shipboard Hygiene and Sanitation team. When a bioweapon attack by an alien race wipes out the Krakau command crew and reverts the rest of the humans to their feral state, only Mops and her team are left with their minds intact.

Escaping the attacking aliens—not to mention her shambling crewmates—is only the beginning. Sure, Mops and her assortment of space janitors and plumbers can clean the ship, but flying the damn thing is another matter. As they struggle to keep the Pufferfish functioning and find a cure for their crew, they stumble onto a conspiracy that could threaten the entire alliance.

What did I think of it:
I absolutely love Hines' Jig the Goblin trilogy, but couldn't get into his Princess series. Then I saw this book and knew I had to try it!

And what a fun SF adventure.

Mops is the head of the janitor crew aboard the Pufferfish. When things go horribly wrong she , her crew, and an alien technician named Grom are the only ones who might be able to save the day.

This book mixes a really suspenseful adventure with lots of humor. I was both on the edge of my seat and laughing. I immediately bonded with Grom, they might be alien, but they were so easy to relate to. Mops and her team were really cool as well. I rooted for all of them to stay alive and to find out what was going on.

Each chapter starts with either a short piece of history or a conversation log, filling in gaps and providing entertainment. As Mops and her crew chase the truth danger stalks them from every side. I had to keep reading to see how this story would end.

All in all a really fun and entertaining read. You bet I will get my trotters on the next book.

Why should you read it:
Janitors in Space! Need I say more?