The Alchemist and an Amaretto - Book Review 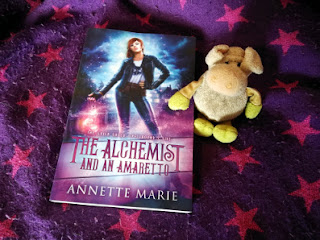 The Alchemist and an Amaretto (The Guild Codex: Spellbound #5)
by Annette Marie

What is it about:
As a guild bartender, I can handle pretty much anything--mages, sorcerers, witches, the occasional demon. But show me anything family-related and I'd rather run for the hills. It doesn't even have to be my family.

So I have no idea why I thought spending the holidays with Aaron's mom and pop was a good idea.

Meeting his famous parents is already terrifying enough, but I've got a bigger problem. Students of his family's renowned mage academy are being attacked on the grounds--and somehow no one has seen a single assailant? Unexplained tracks litter the nearby woods, rumors of forbidden alchemy are circulating the campus...and Ezra has been acting strangely since we arrived.

Something deadly is brewing in the shadow of Sinclair Academy, and the longer we take to uncover it, the more dangerous it becomes. But no matter the risk, we'll protect the students.

And Aaron's parents too, I suppose. If we have to.

What did I think of it:
After finishing Taming Demons for Beginners I immediately picked up the next book in the Spellbound series.

And this was another book that kept me reading deep into the night.

Tori, her three mage friends, and Tori's alchemist friend Sin are spending Christmas at Aaron's parents academy, they think the worst thing they will encounter are Aaron's parents and some stuck up alumni, but they're wrong!

I loved the setting and the set up. It was cool to see a bit about where Aaron came from, and how he struggles to not slip back in patterns from his childhood. Then a group of students gets attacked and things go wrong in a rapid pace.

I was totally hooked and rooting for Tori to save the day. As she is trying to figure out who or what is behind the trouble, things are happen to Ezra that raise the stakes even more. I was at the edge of my seat to discover if all my favorite characters would survive.

This was yet another awesome adventure, and the end left me hungry for more. At the back of the book was a novella that introduced the reader to a new character who will get his own spin-off, and it set the stakes of the next Spellbound book as well.

Guess what I'll be getting my trotters on once released!

Why should you read it:
It's an awesome Urban Fantasy read.