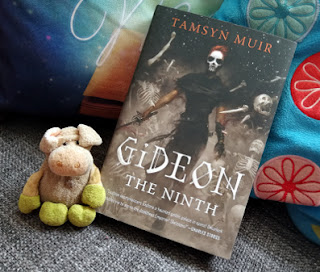 Gideon the Ninth (The Locked Tomb #1)
by Tamsyn Muir

What is it about:
The Emperor needs necromancers.

The Ninth Necromancer needs a swordswoman.

Gideon has a sword, some dirty magazines, and no more time for undead bullshit.

Tamsyn Muir's Gideon the Ninth unveils a solar system of swordplay, cut-throat politics, and lesbian necromancers. Her characters leap off the page, as skillfully animated as necromantic skeletons. The result is a heart-pounding epic science fantasy.

Brought up by unfriendly, ossifying nuns, ancient retainers, and countless skeletons, Gideon is ready to abandon a life of servitude and an afterlife as a reanimated corpse. She packs up her sword, her shoes, and her dirty magazines, and prepares to launch her daring escape. But her childhood nemesis won't set her free without a service.

Harrowhark Nonagesimus, Reverend Daughter of the Ninth House and bone witch extraordinaire, has been summoned into action. The Emperor has invited the heirs to each of his loyal Houses to a deadly trial of wits and skill. If Harrowhark succeeds she will become an immortal, all-powerful servant of the Resurrection, but no necromancer can ascend without their cavalier. Without Gideon's sword, Harrow will fail, and the Ninth House will die.

Of course, some things are better left dead.

What did I think of it:
Necromancers in space? Sign me up!

I will confess I've been lusting after this book ever after seeing an early copy in Dublin this August. So I was very happy to get my greedy trotters on it, and I'd have loved it just for its looks alone.

I was immediately hooked and I loved Gideon. I could totally understand why she wants nothing to do with the house she grew up in, and why she begrudgingly accompanies Harrow to the first house, where all other eight houses will be submitted to a test.

The story that develops can best be described as a Gothic murder mystery in space, and is absolutely fabulous! There were many characters, but all are so well worked out I didn't have a problem keeping up with who's involved in what scheme, and who is on the ball in the contest and who is not. I had my favorites, and once the bodies started falling, I was fearing for their lives.

Even with this book being over 400 pages long, it felt too short. I could have stayed lost in this Gothic adventure for ever. And the ending!!! OMG! I need the next book! You bet I've already preordered it and I'll be impatiently waiting for the release.

Why should you read it:
Necromancers in space!!