Magic for Nothing - Book Review 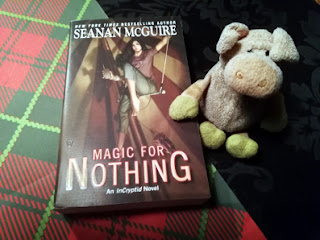 Magic for Nothing (InCryptid #6)
by Seanan McGuire

What is it about:
As the youngest of the three Price children, Antimony is used to people not expecting much from her. She’s been happy playing roller derby and hanging out with her cousins, leaving the globe-trotting to her older siblings while she stays at home and tries to decide what she wants to do with her life. She always knew that one day, things would have to change. She didn’t think they’d change so fast.

Annie’s expectations keep getting shattered. She didn’t expect Verity to declare war on the Covenant of St. George on live television. She didn’t expect the Covenant to take her sister’s threat seriously. And she definitely didn’t expect to be packed off to London to infiltrate the Covenant from the inside…but as the only Price in her generation without a strong resemblance to the rest of the family, she’s the perfect choice to play spy. They need to know what’s coming. Their lives may depend on it.

But Annie has some secrets of her own, like the fact that she’s started setting things on fire when she touches them, and has no idea how to control it. Now she’s headed halfway around the world, into the den of the enemy, where blowing her cover could get her killed. She’s pretty sure things can’t get much worse.

Antimony Price is about to learn just how wrong it’s possible for one cryptozoologist to be.

What did I think of it:
Did I text a friend halfway through the book to ask her if I was rooting for the wrong guy yet again? Totally!

That said: I very much enjoyed this book even though I wasn't happy with the love interest and also not that happy with Antimony at times.

I loved learning a bit more about the Covenant of St. George, and about the carnival Annie has to infiltrate. The mice are also part of the story again, and where there are Aeslin mice you have a happy piggy!

Antimony did work on my nerves half the time, and the other half I cheered her on. She really needs to do some growing up in my opinion, and to stop blaming others for her own choices. But overall I could root for her and her allies, and I was eager to see where things would lead.

The ending, although not a cliffhanger, left me hungry for more, so I'll try to get my trotters on the next book soon.

Why should you read it:
It's a very fun and entertaining UF read.