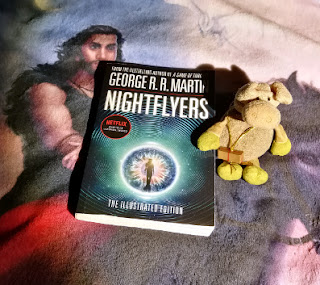 What is it about:
When a scientific expedition is launched to study a mysterious alien race, the only ship available is the Nightflyer, a fully autonomous vessel manned by a single human. But Captain Royd Eris remains locked away, interacting with his passengers only as a disembodied voice--or a projected hologram no more substantial than a ghost.

Yet that's not the only reason the ship seems haunted. The team's telepath, Thale Lasamer, senses another presence aboard the Nightflyer--something dangerous, volatile, and alien. Captain Eris claims to know nothing about the elusive intruder, and when someone, or something, begins killing off the expedition's members, he's unable--or unwilling--to stem the bloody tide.

Only Melantha Jhirl, a genetically enhanced outcast with greater strength, stamina, and intelligence than other humans, has a chance of solving the mystery--and stopping the malevolent being that's wiping out her shipmates.

But first she has to keep herself alive.

What did I think of it:
I have very much enjoyed the HBO series A Game of Thrones, but I didn't feel compelled to read Martin's books. They're huge, and there are so many other books I want to read. But then I ran into this SF novella and I could not resist!

And this is such a cool story!

The plot isn't all that exciting, but it's Martin's writing, and the way he sets mood and atmosphere that made me totally invested and kept me reading. I raced through this story , enjoying the drama and mystery, curious to see who would survive and who'd die and how.

Next to this murder mystery in space I also enjoyed the storyline of the mysterious alien race the scientists are seeking. What are these aliens, are they related to the trouble, and will they appear?

All in all a very enjoyable SF novella. I might have to investigate the Netflix series that was based on this novella.

Why should you read it:
It's a cool SF novella.