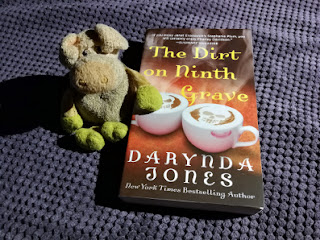 The Dirt on Ninth Grave (Charley Davidson #9)
by Darynda Jones

What is it about:
Charley Davidson is living in New York City as Jane Doe, a girl with no memory of who she is or where she came from. So when she begins to realize she can see dead people, she’s more than a bit taken aback. Strangers who enter the diner where she works seem to know things about her…

Then she is confronted by a man who claims to have been sent to kill her. Sent by the darkest force in the universe. An enemy that will not stop until she is dead. Thankfully, she has a Rottweiler. And the diner’s devastatingly handsome fry cook, who vows to protect her even though he seems to be lying with every breath he takes. But in the face of such grave danger, who can Jane/Charley/whoever she is trust? She will find the truth even if it kills her… or the fry cook. Either way…

What did I think of it:
The above description of this book isn't very accurate I must say. There are lots of things going on, of which sthe things mentioned are only a small part.

Anyway: I had fun with this book.

I must say I didn't totally understand why those who know Charley keep up the pretense and Charley in the dark, but apart from that this is yet another fun and action filled adventure, full of Charley snark, Cookie goofiness, and Reyes scorchingness (yeah, I know it's not an actual word). I was hooked from the start and enjoying the ride.

There were some obvious things, some surprises, and lots of the silly goodness I've come to expect of this series. All in all a satisfying read, and I'll pick up the next book soon.

Why should you read it:
It's a fun and snarky UF read.