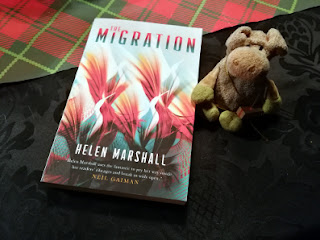 The Migration
by Helen Marshall

What is it about:
When I was younger I didn't know a thing about death. I thought it meant stillness, a body gone limp. A marionette with its strings cut. Death was like a long vacation--a going away.

Storms and flooding are worsening around the world, and a mysterious immune disorder has begun to afflict the young. Sophie Perella is about to begin her senior year of high school in Toronto when her little sister, Kira, is diagnosed. Their parents' marriage falters under the strain, and Sophie's mother takes the girls to Oxford, England, to live with their Aunt Irene.

An Oxford University professor and historical epidemiologist obsessed with relics of the Black Death, Irene works with a centre that specializes in treating people with the illness. She is a friend to Sophie, and offers a window into a strange and ancient history of human plague and recovery. Sophie just wants to understand what's happening now; but as mortality rates climb, and reports emerge of bodily tremors in the deceased, it becomes clear there is nothing normal about this condition--and that the dead aren't staying dead.

When Kira succumbs, Sophie faces an unimaginable choice: let go of the sister she knows, or take action to embrace something terrifying and new.

Tender and chilling, unsettling and hopeful, The Migration is a story of a young woman's dawning awareness of mortality and the power of the human heart to thrive in cataclysmic circumstances.

What did I think of it:
You know me: If I think there might be zombies in a story I want to give it a try.

It turns out that this isn't the zombie book I expected, but I was not disappointed. This story is set in the near future and is partly about family and dealing with grief and the unknown, partly about our fear for that which is different, and partly about the threat of climate change.

I know that sounds like a lot to tackle in one story, but Marshall makes it work without this book turning into a morality lesson. Instead it's a gripping and emotional story about a teen who is trying to deal with change and loss. I was hooked from the start and eager to find out what was going on and what choices Sophie would make.

Near the end it got a bit over the top, but again Marshall made it work. All in all a very satisfying read.

Why should you read it:
It's a beautiful Near Future read.