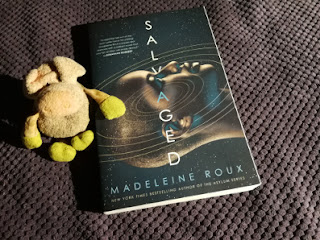 What is it about:
In this dark science fiction thriller, a young woman must confront her past so the human race will have a future.

Rosalyn Devar is on the run from her famous family, the bioengineering job she's come to hate, and her messed-up life. She's run all the way to outer space, where she's taken a position as a "space janitor," cleaning up ill-fated research expeditions. But no matter how far she goes, Rosalyn can't escape herself. After too many mistakes on the job, she's given one last chance: take care of salvaging the Brigantine, a research vessel that has gone dark, with all crew aboard thought dead.

But the Brigantine's crew are very much alive--if not entirely human. Now Rosalyn is trapped on board, alone with a crew infected by a mysterious parasitic alien. The captain, Edison Aries, seems to still maintain some control over himself and the crew, but he won't be able to keep fighting much longer. Rosalyn and Edison must find a way to stop the parasite's onslaught...or it may take over the entire human race.

What did I think of it:
This is a very entertaining read.

I had heard it's scary and creepy, and although there was indeed a nice creep factor at times, it wasn't all that scary to me. But I have to warn you: It seems I'm not easily scared by books.

The viewpoint switches between several characters, and at times this is a strength, but it also reduced the suspense for me. I think this book could have been stronger with less viewpoints. Still I was interested from the start and flew through the book to see where the story would lead to.

I must say my favorite character wasn't Rosalyn or Edison, but rather one of the other crew members aboard the Brigantine. I felt myself rooting for that character and it made me more invested in Rosalyn finding a solution. The ending is not a cliffhanger, but does leave room for Roux to create a sequel.

All in all this is a fun and entertaining read. I'll most definitely keep an eye out for more by Roux.

Why should you read it:
It's a very entertaining SF thriller.