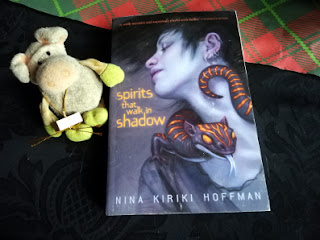 What is it about:
Roommates Jaimie Locke and Kim Calloway are each looking to find a new life at college. It’s Jaimie’s first time Outside—away from her large, complicated family and their magical traditions—and she wants to learn what nonmagical life is like. Kim is anxious to escape the depression that’s been dragging her down since last year so she can make new friends and create the art she loves.

But almost as soon as they unpack, Jaimie realizes that Kim’s depression is different from normal sadness. Something outside of Kim is literally forcing her to be depressed, pursuing and draining her. Just like that, the two girls—along with Jaime’s cousins and a Presence named Rugee—try to capture and rout the creature that is following Kim.

No one said that college would be easy....

What did I think of it:
Did I buy this book because of that gorgeous cover by Daniel Dos Santos? You bet!
(And apparently I was very lucky amazon.de still had a copy for a normal price)

And I'm so glad my shallow cover love let me buy this book, because it is such a cool story!

The main story is simple enough and not that difficult to figure out. I was way ahead of Kim and Jaimie. It's the characters, the worldbuilding, and writing that totally drew me in and kept me reading. I loved both Kim and Jaimie and how both of them looked at the world. Then more characters got introduced and I loved most of those as well.

This book is third in a series, but I can't say I felt like missing out. The other two books seem to be about other characters, who are related to Jaimie, and after reading this book I will try to get hold of the other two books as well. And I will absolutely investigate what other books Nina Kiriki Hoffman has written.

Why should you read it:
It's a well written and cool UF read.