This weekend the sad news reached me that Diana Wynne Jones has died on 26th March, 2011.

I dedicate my second Author Love post to this amazing author who gave me many hours of reading pleasure with just one book, but that book is the most beautiful and cool children's book I ever read. 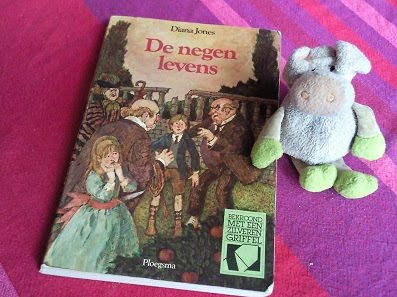 Somewhere in the eighties I came across this book: 'De Negen Levens' (the nine lives. Original English title = Charmed Life). I was drawn to it by the beautiful cover, then I started reading it and discovered the story was even better than the pictures.

It's about Cat Chant and his sister Gwendolen, orphaned as the result of a tragic boat accident and adopted by their relative, the mysterious sorcerer Chrestomanci. Cat begins to settle in at Chrestomanci Castle, but Gwendolen hates it. No one—least of all Chrestomanci—seems to appreciate Gwendolyn's magical powers, and after weeks of playing nasty magical practical jokes on the various inhabitants of the Castle, Gwendolyn finally leaves by going into a parallel world and replacing herself in Cat's world with a double called Janet. Cat and Janet eventually find the way to set the worlds right again, with some help from unexpected quarters.

I completely fell in love with this story and the way it was written *. After borrowing the book time and time again from the library I was overjoyed when I found it at a secondhand store and finally could call it my own. 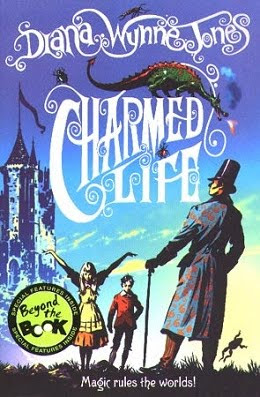 I've been rereading this book over the years at least once a year and could recite the story in my sleep, but however often I reread this book it never grows old, it never loses that magic that I encountered on my first read.

I did try reading other books in the same setting and featuring Chrestomanci, and they were nice reads, but they never got hold on me like Charmed Life did. (Part of this may be because I read them in Dutch and in the new translation which sucks *.)

But then one day I was reading a movie magazine and read something about a Movie called 'Howl's Moving Castle'. The article caught my eye because it was a movie by Hayao Miyazaki (I absolutely love his Tonari no Totoro (my neighbour Totoro)), but held it because it also named Diana Wynne Jones as the author of the book the movie was based upon. 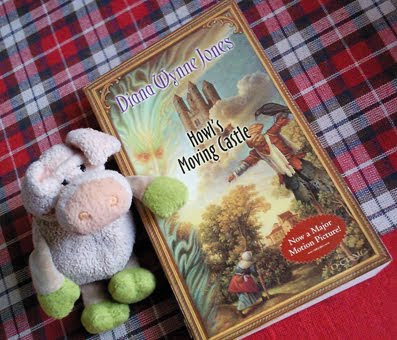 So I went out and bought Howl's Moving Castle.
Luckily it was easy to find because of the hype around the movie.

And when reading Howl's Moving Castle I fell in love with Diana Wynne Jones' writing all over again. I can advice anyone who's only seen the movie to pick up this book as it's so much richer than the movie. It gives so much more in both emotions and story.

I now have two books by Diana Wynne Jones that I will keep on rereading for the rest of my life and I will also keep an eye out for her other books as these two give me so much joy I'm sure there are more of her books that I will love just as much as these two.


* Note to Dutch followers: Please find the old translation as the book has been translated again for a newer Dutch edition and that translation is horrible.
Posted by Sullivan McPig at 13:03

I learned about Diana Wynne Jones' death a few days ago as well and felt deeply saddened. So far, I've read only the first four Chrestomanci books, but the impression that she was a formidable talent, which was instantaneous, has never left me. (Heck, my reaction to Charmed Life was: "Why don't more people know about this??? It's better than Harry Potter!!!)

This is another great tribute!

And I'm so sorry to hear about the awful new translations. =(