I've decided to do a series of posts on some of my favourite authors.
In these post I will tell about how I discovered them and why I love the books of these authors so much.

Not sure yet if I'll make it a weekly feature or if I'll post them whenever the mood strikes me. 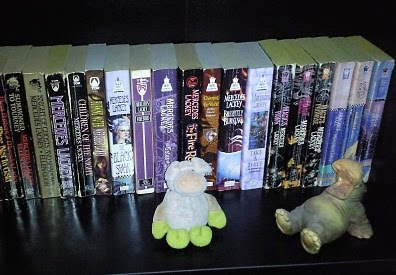 A long, long time ago (probably in 1989 or 1990) I discovered a book in my library called 'Rolans Keuze' (Rolan's choice. Original English title = Arrows of the Queen). It was the first book in a trilogy and it sounded like something I might like, so I borrowed it.

I absolutely loved it!

For those who do not know anything about Lackey's books:
Arrows of the Queen is about a young girl, Talia, who doesn't fit in the strict patriarchal society she lives in. She runs away and is found by a magical horse-like creature who brings her to the capital of the land where she lives. Once there Talia discovers she's destined to be a herald (in short: heralds are the protectors of the land) and she's enrolled in a college to be trained.

The plot may sound like it's been done time and time again, but Lackey's writing (even in translation) is wonderful, Talia is such a sweet character and the world building is so magical and yet recognisable that I do not care one bit if it's an original plot or not because all those things I just mentioned make it original and fresh.

All in all I can safely confess I was hooked from the start. 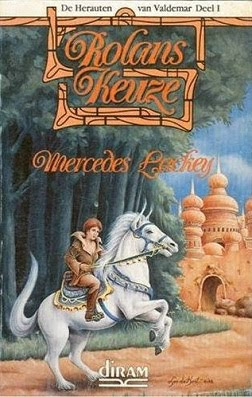 Now I must tell you that at the time I didn't really read books in English yet, so after reading 'Rolans Keuze' I kept looking for the translation of the next two book in this trilogy, but without any luck. I did start reading some roleplay books and comics in English in the next few years, but never dared make the step for my normal reading.

And then one day (must have been somewhere between 1994 and 1996) I was browsing for books in my local bookstore and spotted the complete 'Heralds of Valdemar' trilogy in the foreign language section.

Having reread 'Rolans Keuze' a gazillion times by then and still loving it as much as the first time I read it I made the decision I just had to try to read the books in English so I bought all three books in English.

I will confess I read those books with a dictionary at my side and it was slow reading at first. But it was so worth it! The books were everything I hoped they'd be. 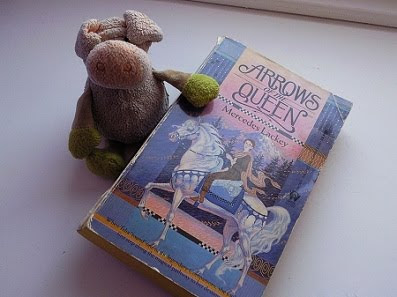 After finishing that trilogy I immediately went out and bought the next trilogy I could find (The Last Herald Mage) and so on.

After those first difficult reads with my dictionary handy my understanding of the English language grew and it wasn't long before I could put my dictionary aside again and enjoy reading English just as much as I enjoy reading Dutch, which opened up a whole new world for me as there were (and are) so many beautiful stories out there that weren't translated to Dutch. And with my improved English I was able to make friends all over the world as I now could communicate with other English speaking and writing people online.

So Mercedes Lackey's writing is responcible for expanding my world in more ways than one. Reason enough to love her as an author, but it's not the only reason or even the most important reason. Her stories and writing are beautiful and rich and it's her books and characters that make her one of my favourite authors. Rereading one of the many books I have from Mercedes Lackey always feels like catching up with a dear friend and I'll keep on rereading until I have worn my copies of her books out at which point I'll have to go out to get new ones ;-)

Wow! I didn't know that you were not a native English speaker. Your English is wonderful. I am also a big fan of Mercedes Lackey. I do love her Valdemar books the best though. I look forward to seeing who some of your other favorite authors are. Happy reading!

Sullivan, you and your owner are both wonderful and I'm so glad you decided to read those books in English. :)

@Kathy: Thanks for the compliment. The Valdemar books are my favourites as well, although I also have a soft spot for her Diana Tregarde books as those got me into reading UF.

@Demented Wench: *hugs* thanks :-)
You are our favourite Wench!

That is amazing! Without Mercedes Lackey, there wouldn't be any Sullivan on the web!

*waves at Marlowe*
Yup, Mercedes Lackey has a lot to answer to ;-)

This is a truly wonderful tribute to Mercedes Lackey! We often hear of books which change people's lives, but the change Lackey's novels have wrought in yours are above and beyond the usual stories.

I wish my ESL students had a love of reading like yours. They'd probably just teach themselves and consequently put me out of a job (LOL), but it would be very good for them.

This is so funny - that could be picture of my bookshelf. I carried the laptop over to hold it up and see. But I don't see the Oathbound/Oathbreaker/Oathblood series, crowned by By the Sword. Are they just off screen? I think By the Sword might be my favorite of them all.

@Enbrethiliel: Thanks! :-)
@Jeffe: The Oathbound/Oathbreaker series is one that I still have to buy one day. My owner's mother actually owns practically all the Mercedes Lackey books (we infected her I must confess) so we borrow those when we want to reread those.