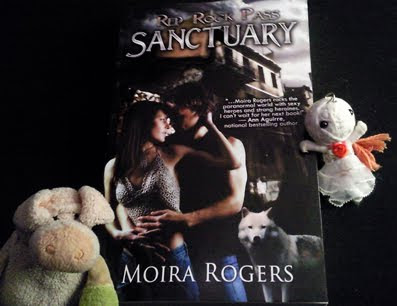 Today Voodoo Bride will be reviewing the second story in this book:
Sanctuary Lost

What is it about:
If there’s one thing that Brynn Adler hates, it’s feeling helpless and vulnerable in unfamiliar territory. Three weeks ago, life tossed her into just such a world. A world of werewolves she never knew existed—until she found out her sister was one of them.

The pack seems determined to hurry her back to the normal world of humans. But after everything she’s witnessed, she’s not sure she wants to go—especially if it means leaving not only her sister behind, but the one man who makes her forget her life is falling apart.

Now all she has to do is convince him to agree to a plan to force the pack to let her stay.

Joe Mitchell has been battling his protective instincts since he rescued Brynn from her kidnapper. Getting involved with her is a bad idea for a lot of reasons. She’s on shaky emotional ground, and a supernatural war is no place for a human woman. He’s not about to let her make a hasty decision, one that will only bring her pain and regret.

Now all he has to do is let her go.

What did Voodoo Bride think of it:
After reading the first story in this series I was quite confident I would like this story and indeed the Moira Rogers duo didn't disappoint.

I think I might even love this story a bit more than the first. There was more balance between the romance storyline and the overall storyline and I really liked that. The romance is hot, steamy and intense and the action storyline is kick-ass and intense as well. Brynn and Joe are both a bit dense at times, but that's written into the story in such a way you can understand why and relate to them. There's a new character introduced who clearly will get her own story and who helps expand on the world building, but all this is done in a way that it fits into the story, so it doesn't feel forced.

So a great sequel that convinced me to keep reading this series.

Why should you read it:
It's got cool action, steamy romance and hot, sexy werewolves!