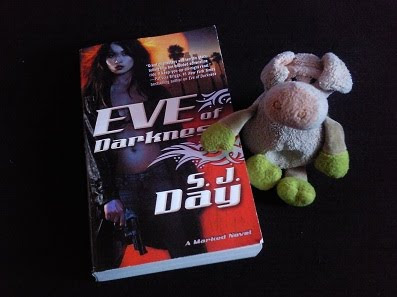 What is it about:
Cursed by God, hunted by demons, desired by Cain and Abel... All in a day's work.
For Evangeline Hollis, a long ago fling with a bad boy from the wrong side of the tracks just became a disaster of biblical proportions. One night with a leather-clad man of mystery has led to a divine punishment: the Mark of Cain.

Thrust into a world where sinners are drafted into service to kill demons, Eve's learning curve is short. A longtime agnostic, she begrudgingly maneuvers through a celestial bureaucracy where she is a valuable but ill-treated pawn. She's also become the latest point of contention in the oldest case of sibling rivalry in history...

But she'll worry about all that later. Right now she's more concerned with learning to kill while staying alive. And saving the soul she'd never believed she had.

What did I think of it:
A nice, but capricious read. After reading the first couple of chapters I began to think I had stumbled upon a book that's more smut than story, but then suddenly after those chapters there was hardly any smut at all for the remainder of the book. The story itself was interesting enough to keep reading until the end of the book, but not interesting enough to make me hunger for the next book. World building, characterisation and writing were all decent and especially the demons were intriguing. The idea of sinners being marked and then given a chance to redeem themselves was very original I must say. All in all a nice read, but I won't be reading anymore books in this series.

Why should you read it:
This book has cool demons and an original setting.

It's a good thing you won't be reading any more books in the series. I read all three and was then really upset to discover that the author changed publishers and decided not to write anymore books. Apparently she wrote a short story in an anthology to wrap things up .... but I'm still disappointed that the series didn't end properly.