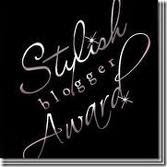 Voodoo Bride and me got awarded with the Stylish Blogger Award by Kerry Schafer!

Thanks Kerry:
We both feel quite honoured by this!

Here's the rules connected to this award:

1. Thank the Stylish Blogger Award giver and link back to their blog.
Already done!

- Voodoo Bride actually never got to be a real bride. There was some kind of tragedy at her wedding day that resulted in her being left at the altar, but as she refuses to discuss the details, that's about all I can tell you (except that I'm pretty sure there was voodoo involved).

- My big dream is to be my owner's muse and inspire her to write a story full of zombie mayhem. (Ok, maybe that's not a little known thing, but it's an important one I think.)

- Even though I tried real hard to convert my owner, she's fond of bacon and sometimes even eats it while I'm with her!

- I myself only eat animals if they're made out of chocolate or marzipan.

- Voodoo Bride's favourite movie is Titanic. Not because of the lovestory, (she can't stand Leonardo) but because of the real stories that are told: Mr and Mrs Straus who stay together even though Mrs Straus could have gotten a seat on a lifeboat, Mr Guggenheimer who accepts his faith by dressing his best and refusing a lifebelt, etc.. Next to having watched the movie a gazillion times (and crying at it every time) she has lots of books about the Titanic disaster.

- Our favourite Holiday is Sinterklaas (St. Nicholas Eve) which is on the 5th of December. Sinterklaas and his helpers bring presents to everyone of that day, much like Santa Claus does at Christmas. I think they're cousins or something.

3. Pass the award on to other bloggers
I'm giving this award to:
Becky from Bibliognome
I just love the name of Becky's blog!

Enbrethiliel from Shredded Cheddar
Another blog name I love!

Both ladies also have really interesting blog content, so check their blogs out!

And lastly:
All the ladies of Word Whores
Even though the bacon frotting is giving me nightmares, you are all classy whores to me ;-)

4. Alert the bloggers to the fact that they’ve been awarded.
I'm on it!

Email ThisBlogThis!Share to TwitterShare to FacebookShare to Pinterest
Labels: awards