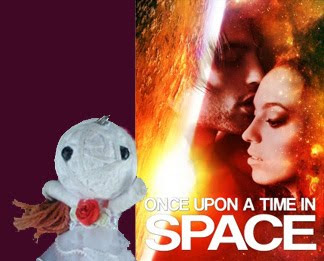 Once Upon A Time In Space by Heather Massey
ebook

What is it about:
In the sea of stars, an epic love story is about to begin...
Earth is dying. Nick Venture, the last living descendant of Christopher Columbus, embarks on a dangerous mission to find a new planet and save humanity. This places him on a collision course with Raquel Donovan, the deadliest space pirate in the galaxy.
Raquel lives for one purpose: revenge against a horrible demon from her past. When an attempt to hijack Nick’s starship backfires, Raquel becomes his protector in order to avoid capture by the tyrannical Space Defense Corps. Nick and Raquel are irresistibly drawn to one another despite the forbidden nature of their attraction. But the conflicted pirate’s deepest secret could tear the couple apart even as humanity’s time runs out…

What did Voodoo Bride think of it:
A very tasty SciFi romance with just the right mix of adventure and romance. Massey creates a believable future that is gritty and bleak, but also gives it colour by writing a story that's full of action, hardship, heroics and hope. I really liked the cast of minor characters who made the story come further alive. My favourite has to be Twitch, Nick's pilot and practically his second in command. The romance between Nick and Raquel is steamy, intense and skirting the edges of frustrating, but that makes the good parts all the more satisfying. All in all a great read.

Why should you read it:
It's an action packed, steamy SciFi romance with Space Pirates!

Certainly my kind of read. What makes this one different from all the others out there?

The balance between romance and scifi. Usually one of these two overshadows the other, making it either a romance with a little bit of scifi sauce or a scifi with a small dose of romance.