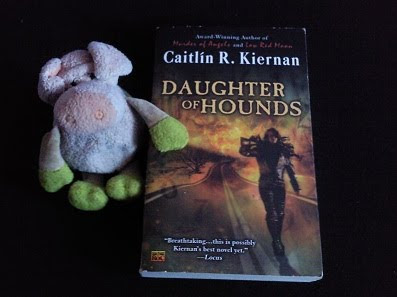 What is it about:
They're known as the Children of the Cuckoo. Stolen from their cribs and raised by ghouls, the changelings serve the creatures who rule the world Below and despise the world Above. Any human contact is strictly forbidden and punishment is swift and severe for those who disobey.
Eight years ago, Emmie Silvey was born on Halloween while a full moon rose in the sky. Raised in Providence by her widower father, she's a strange, yellow-eyed girl, plagued with visions of impossible worlds and fabulous beings. Now her path is about to intersect with one of the changelings, a violent young woman named Soldier who's quickly slipping from the favor of her ghoul masters.

Emmie's and Soldier's fates are inextricably linked, and together they must face the monsters and unearthly forces that have shaped their lives... and threaten their futures.

What did I think of it:
A weird, but utterly awesome book. This story reads like a dream or hallucination from time to time, but the writing, characters and world building are so cool it sucked me right into it's madness (which still makes a lot of sense though). And I fell completely in love with Soldier and with the ghouls, which are Lovecraftian ghouls btw. The story is multi-layered and complex, but all layers fit perfectly together in the end. There seem to be two books that precede this one, but I didn't feel like missing out on the story by not having read the other books, so this book is readable as a stand alone. I sure will pick up other books by Kiernan when I get the chance.

Why should you read it:
It's a weird, but cool read, especially for fans of Lovecraftian mythology.

Good review, this grabbed my attention straight off the bat. Weird is good (usually) lol.

BTW, if you've never read these guys, seeing as how you like *weird* - try to find some collections of Ambrose Bierce, Manly Wade Wellman, Oliver Onions, M. R. James,etc. Some of the BEST supernatural writers in the last century. Right up there with Poe and Lovecraft :)

Thanks for the recommendations. I think I've read a couple of stories by Ambrose Bierce, the others sound unfamiliar to me.