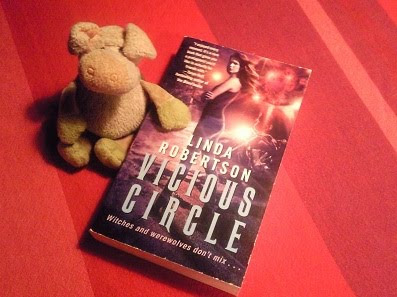 What is it about:
Being a witch doesn't pay the bills, but Persephone Alcmedi gets by between reading Tarot cards, writing her syndicated newspaper column, and kenneling werewolves in the basement when the moon is full — even if witches aren't supposed to mingle with wolves. She really reaches the end of her leash, though, when her grandmother gets kicked out of the nursing home and Seph finds herself in the doghouse about some things she's written. Then her werewolf friend Lorrie is murdered...and the high priestess of an important coven offers Seph big money to destroy the killer, a powerful vampire named Goliath Kline. Seph is a tough girl, but this time she bites off more than she can chew. She needs a little help from her friends — werewolf friends. One of those friends, Johnny, the motorcycle-riding lead singer for the techno-metal-Goth band Lycanthropia, has a crush on her. And while Seph has always been on edge around this 6'2" leather-clad hunk, she's starting to realize that although their attraction may be dangerous, nothing could be as lethal as the showdown that awaits them.

What did I think of it:
This is a great read. The world building is very original and the characters really cool. I can't even begin to pick a favourite character as they're all awesome (bad guys included). The story is interesting and able to stand on it's own, but also gives plenty of intriguing story hooks for future books. Persephone might be a witch, but she's so human in how she thinks and acts that she feels like she might be your next door neighbour (well, if your next door neighbour had a kennel for werewolves). I like how she's not some superhero character, but an almost normal person who's forced into action by the things coming her way. I'm already looking forward to reading more in this series.

Why should you read it:
It's a cool UF story with witches, werewolves and vampires.

I liked this one too. I have book two on the tbr shelf. :)

Have a great day.

This looks great! And it involves a werewolf kennel? Awesome.