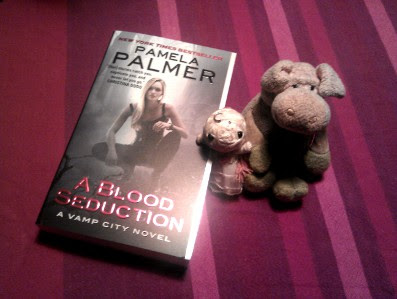 What is it about:
Vampires live only for lust and pleasure in the eternal twilight of Vamp City. But the city's magic is dying. The only person who can restore it? A beautiful woman from the mortal world...one who knows nothing of the power she wields.

Quinn Lennox is searching for a missing friend when she stumbles into a dark otherworld that only she can see—and finds herself at the mercy of Arturo Mazza, a dangerously handsome vampire whose wicked kiss will save her, enslave her, bewitch her, and betray her. What Arturo can't do is forget about her—any more than Quinn can control her own feelings for him. Neither one can let desire get in the way of their mission—his to save his people, hers to save herself. But there is no escape from desire in a city built for seduction, where passion flows hot and blood-red.

What did Voodoo Bride think of it:
*Might be a bit spoilery about the romance*

I'm not sure what to think of this book to be honest.

First of all the description of the story threw me off. It speaks of a world only Quinn can see...

It turns out that is only the case in the first couple of chapters. After that she is transported to that world and everyone she meets lives in that world so can see that world just fine.

Not that there's anything wrong with that, but it made for a whole different story than I was expecting.

I really liked the world building though. The world where Quinn is transported to is dark, sinister and very creepy. I like the idea of a world created especially for vampires so they can give in to their dark nature. There were times I was utterly icked out by their actions.

The action storyline was really intense and suspenseful. I kept wondering where it all would lead. The book did end with lots of questions unanswered and I will confess I'm anxious to know what will happen next.

Then there was the romance.

Hmm.... I'm not so sure about that I have to say. There was a strong attraction between Quinn and Arturo, but the relationship was build on layers and layers of distrust, lies and deception. I found it hard to believe these two will ever find a happily ever after or even a happily for as long as it lasts. Maybe their relationship will undergo strong changes later on in the series, but for now I'm unconvinced they can ever work their differences out.

So in the end I enjoyed the setting and the action storyline, but am wary about the romance. I think I'll give the next book in this series a try once it's released though and I will probably also try out other books by Palmer.

Why should you read it:
It's a dark and disturbing PNR

I had some serious issues with A Blood Seduction, some of which you pointed out in your review. But the worldbuilding was incredible. Definitely one of the most original that I've read in a while. Great review!

I haven't heard of this one but the story line sounds very intriguing!!! :D

I don't know what to think about this one, there are a lot of mixed review... I'm curious but I finally passed for reading other books. thanks for the review!

Lol and now you have read a book by an author who is coming to Berlin ... you can at least get it autographed :)