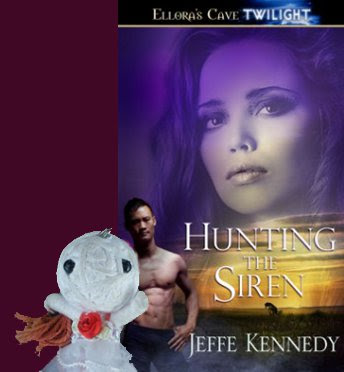 What is it about:
A vampire queen grown powerful with age, Imogen has protected her band of nightriders through the centuries. When refugee vampires from earthquake-shattered Europe seek shelter and sustenance, she’s honor-bound to feed them, by any means necessary. When her lieutenants dump the vengeful human man Kasar at her feet, Imogen succumbs to his masculine vitality and her overwhelming hunger for his blood—and his body.

Kasar has survived the breaking of the world, only to discover the vampire queen has slaughtered his sister and her unborn child. With the last of his bloodline dead, only his desire for vengeance keeps Kasar alive. He imagines he can pretend to succumb to Imogen’s seduction—not that he has a choice, chained as he is to the foot of her bed—and bide his time until he has an opportunity to kill her. The passion he finds in her arms is unexpected and impossible to resist. But this haven of desire and satiation could easily destroy them both.

What did Voodoo Bride think of it:
This is a seriously hot story.

I love a romance where there's a forced seduction if it's done right. And Kennedy manages to deliver. This story is intense and more than satisfying.

What I really liked about this romance was that it's the heroine who's in charge. Most of the times with forced seduction it's the male who gets to be the aggressor, so it was fun to read a story where it's the other way around. Not that Kasar didn't get a chance to turn the tables on Imogen I must add.

I love the world Kennedy created for this series. It's grim and dark and it feels real. I could easily picture the setting and see tons of possibilities for more stories.

The romance was hot, steamy and surprisingly sweet as well. I loved Imogen, who's a strong woman, but also has a softer, more vulnerable side. Kasar is a great match for her.

The one negative thing I can say about this story is that Kasar starts out having a beard, but it gets shaven off during the story. I know this is a very personal pet peeve (beards are cool! Let heroes keep their beards!) and that most women love their heroes clean shaven, so this is probably only a negative thing for me and not for other readers.

The ending, although giving enough closure, left some things open and it makes me hungry for more. I hope Kennedy will write many more books in this series. I for one will read them all.

Why should you read it:
It's a hot Post-Apocalyptic Vampire Romance

It was a scruffy beard. Possibly lice-ridden. You wouldn't have liked it!

Well, I think some of these heroes need their beards to stay warm, especially as most of them are shirtless and have their pants pulled down to their pubic bone ... you'd think they'd get cold lol ;D