I've been internet stalking Kerry Schafer for some time now and giving her unwanted zombie advice. She's a really cool person and I'm really looking forward to the release of her book Between. 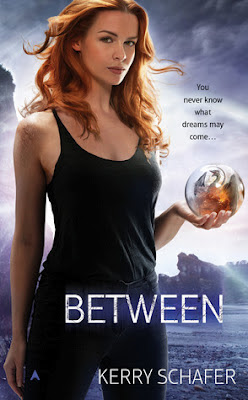 Between
by Kerry Schafer

Vivian’s life is finally on track. She has a job she loves as an ER doctor and has just met – literally – the man of her dreams. But when her eccentric grandfather is murdered and designates her as his next of kin, she discovers that she is the last of a race of beings known as dreamshifters. It is her task to guard the doorways between waking and dreaming, which have already begun to unravel, spilling dangerous creatures from dream into the waking world. When she sets out to close the open doors and protect her town and the people she loves, Vivian confronts dragons, intrigue, and the dark secrets of her own family history. In the end she comes face to face with a sorceress seeking eternal life and ultimate power. Vivian must find a way to stop her, or reality will be forever altered.

Yeah, it does, I'm adding this on my wishlist :) Thanks for sharing!

Oh! I do like the looks and sounds of this one. Like the dragon in the ball, and the sounds here. Thanks for sharing this new book!