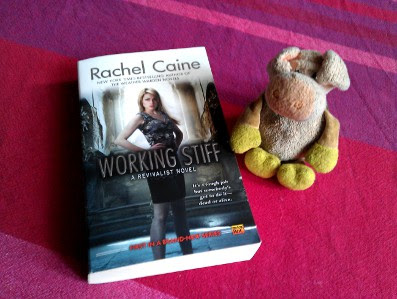 What is it about:
Bryn Davis was killed on the job after discovering her bosses were selling a drug designed to resurrect the dead. Now, revived by that same drug, she becomes an undead soldier in a corporate war to take down the very pharmaceutical company responsible for her new condition...

What did I think of it:
This was a fun read.

The idea of someone resurrected from the dead was well thought out, including weaknesses and how such a person would react to her state. I also really liked the action storyline where Bryn and her allies are on a deadline to find a corporate thief before her boss decides she's a liability and she needs to be terminated. It makes this story very tense and suspenseful.

I had some difficulties with Bryn. For someone who's been in the army she's acting like a damsel in distress a bit too much in my opinion. I also had some trouble getting into the romance. I once again started rooting for the wrong guy and maybe that's why I didn't feel a connection between Bryn and her love interest at first. But after a shaky start it picked up nicely and I ended up enjoying the romance.

The ending felt a bit chaotic and rushed though. I felt a bit disappointed by some of the solutions. There was also a plot line that was left open for the next book.

In the end I really enjoyed this book and apart from the flaws I mentioned it's a compelling read. I will most probably give the next book in this series a try.

Why should you read it:
It's a suspenseful Urban Fantasy read

You had me at *resurrected from the dead*! ;D

Howver, I'm not sure if this is one I'd buy or not, maybe I can find it used or through the library? But good review, as always! <3

I have to say I like the idea and setting of this book. :) I do want to get it one of these days. :) Thanks for the thoughts.

Zombies are always awesome. I have this book, but I wasn't sure if I wanted to read it. Now that I know your concerns, I think I'll give it a try with those in mind.

Glad you enjoyed it Sullivan :) And I agree with you, she did not strike me as an officer.

Oh I have this one in my TBR pile, I need to try it as well.

Thanks for your comments everyone!