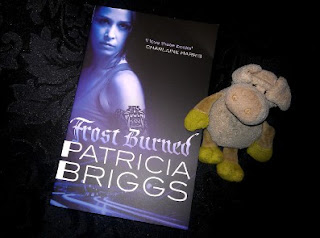 What is it about:
Mercy Thompson’s life has undergone a seismic change. Becoming the mate of Adam Hauptman—the charismatic Alpha of the local werewolf pack—has made her a stepmother to his daughter Jesse, a relationship that brings moments of blissful normalcy to Mercy’s life. But on the edges of humanity, what passes for a minor mishap on an ordinary day can turn into so much more…

After an accident in bumper-to-bumper traffic, Mercy and Jesse can’t reach Adam—or anyone else in the pack for that matter. They’ve all been abducted.

Through their mating bond, all Mercy knows is that Adam is angry and in pain. With the werewolves fighting a political battle to gain acceptance from the public, Mercy fears Adam’s disappearance may be related—and that he and the pack are in serious danger. Outclassed and on her own, Mercy may be forced to seek assistance from any ally she can get, no matter how unlikely.

What did I think of it:
This series is one of my favorite Urban Fantasy series and I will confess I pre-ordered Frost Burned as soon as I could.

It turned out to be a cool read.

This is a very suspenseful and emotional story. I like how events from Briggs other (related) UF series Alpha & Omega have their effect on Mercy and her family and friends.

What I also really enjoyed was getting a look inside Adam's mind. Some of the story was narrated by him. He's been a major character since the start of the series and it was fun to learn a bit more about what makes him tick.

I did notice once again that from all Briggs supernatural creatures I like the vampires the least. The parts of the story that had to do with them were the least interesting to me. I think Briggs is at her best when writing about wolfs and fairies, but that's probably a very personal taste.

The ending wasn't to my satisfaction I'll confess. I had the feeling I was reading one story and then suddenly that story was taken away from me and replaced with something that wasn't as good as what I was reading before.

But overall I very much enjoyed Frost Burned and I will most certainly read upcoming books in this series once they release.

Why should you read it:
It's well written and suspenseful Urban Fantasy.

I have read the book last week, and enjoyed it very much, but it is not my favourite book in the series.

aaaaah I can't wait to start this one! I need more time!

@Aurian: I think my favorite is still Iron Kissed.

Glad to hear you enjoyed it. I really need to get to her books. *sigh*