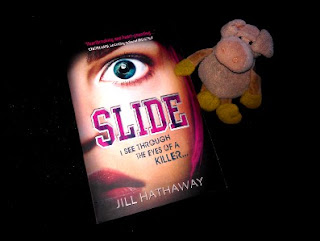 What is it about:
Vee Bell is certain of one irrefutable truth--her sister's friend Sophie didn't kill herself. She was murdered.

Vee knows this because she was there. Everyone believes Vee is narcoleptic, but she doesn't actually fall asleep during these episodes: When she passes out, she slides into somebody else's mind and experiences the world through that person's eyes. She's slid into her sister as she cheated on a math test, into a teacher sneaking a drink before class. She learned the worst about a supposed "friend" when she slid into her during a school dance. But nothing could have prepared Vee for what happens one October night when she slides into the mind of someone holding a bloody knife, standing over Sophie's slashed body.

Vee desperately wishes she could share her secret, but who would believe her? It sounds so crazy that she can't bring herself to tell her best friend, Rollins, let alone the police. Even if she could confide in Rollins, he has been acting distant lately, especially now that she's been spending more time with Zane.

Enmeshed in a terrifying web of secrets, lies, and danger and with no one to turn to, Vee must find a way to unmask the killer before he or she strikes again.

What did I think of it:
This was an enjoyable read.

It's in present tense and full of teenage drama. I really wonder if real high schools are just as bad as those in YA books and movies I must confess.

But the drama fits the story and eventhough written in present tense it's a fast and pleasant read.

I liked the idea of Vee sliding into other people's minds and Hathaway uses this concept in a way that makes Slide a suspenseful story.

There was some lecturing going on, but not enough to really annoy me (apart from the 'cool girl turns pastel' part, that always annoys me). The story skirted the edges of believability at times and I'm not talking about Vee's sliding ability here. But I decided to go along with it and was rewarded with a very entertaining read.

All in all I very much liked this book and I think I'll give the next book in this series a try once it releases.

Why should you read it:
It's an entertaining Paranormal YA read.

You know I always wonder if US high schools really are how they always seem to be portrayed in books, films and TVs with popular kids, Geeks etc as well... Or is it just a myth...?

This was a fun read - not one to take seriously though! I enjoyed it. :-)

That cover alone is enough for me not to pick it up. And I think highschools here in Holland are a tiny bit the same. You will always have popular kids and not popular kids. The smart ones, the sporty ones (although I am happy that football players are not so adored as in the states).

I was curious about this one, I thought about buying it but finally didn't do it. thanks for the review!