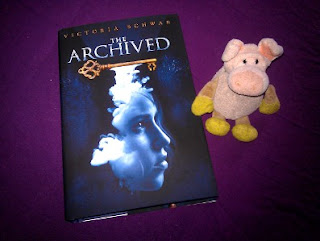 What is it about:
Imagine a place where the dead rest on shelves like books.

Each body has a story to tell, a life seen in pictures that only Librarians can read. The dead are called Histories, and the vast realm in which they rest is the Archive.

Da first brought Mackenzie Bishop here four years ago, when she was twelve years old, frightened but determined to prove herself. Now Da is dead, and Mac has grown into what he once was, a ruthless Keeper, tasked with stopping often—violent Histories from waking up and getting out. Because of her job, she lies to the people she loves, and she knows fear for what it is: a useful tool for staying alive.

Being a Keeper isn’t just dangerous—it’s a constant reminder of those Mac has lost. Da’s death was hard enough, but now her little brother is gone too. Mac starts to wonder about the boundary between living and dying, sleeping and waking. In the Archive, the dead must never be disturbed. And yet, someone is deliberately altering Histories, erasing essential chapters. Unless Mac can piece together what remains, the Archive itself might crumble and fall.

What did I think of it:
I have this rule for myself that I can only buy a book if it's less than 10 Euro, unless it's a book by a 'must buy' author, like Ann Aguirre or Laura Bickle. So when I heard about The Archived and saw that it was more than 10 Euro I was disappointed. It sounded like it might be a really cool read, but I just couldn't buy it until the price dropped or a paperback version was released. But then I won a gift certificate and used that to treat myself to The Archived.

Was it worth it to bypass my own rule this way?

It was. This is a very original and cool read.

I really liked the idea of this big library full of husks, carrying the history of the deceased. I also could easily imagine the creepy corridors and hallways Mac has to enter to hunt down the escaped Histories. I absolutely loved the world building.

Present tense (again) aside the writing was nice. Schwab's writing really fit the mood of this story. It's beautiful and a bit contemplative.

I really liked Mac, even though she is rash and pushy at times. As in most YA books there's a bit of a love triangle thing going on, but I actually liked how it was done for once.

The story itself was slow at times and then with sudden spurts of action. All in all I really liked it and near the end I couldn't put the book down until I finished it.

So this was a really enjoyable read and I'm glad I picked it up. I will probably read the next book as well, but it will take another gift certificate to purchase it if it's more than 10 Euro. And if I don't have a gift certificate I'll wait for the cheaper paperback version.

Why should you read it:
It's an original Paranormal YA read.

Way too creepy for me Sullivan, glad you enjoyed it though.

I do have kind of the same rule though, I don't want to spend more than 6 euro on a book, unless it is one of my favourite authors, and then still not many get on the list of: no matter the cost. One of them is Bertrice Small.