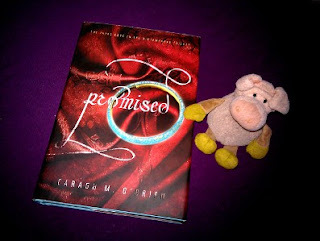 What is it about:
After defying the ruthless Enclave, surviving the wasteland, and upending the rigid matriarchy of Sylum, Gaia Stone now faces her biggest challenge ever. She must lead the people of Sylum back to the Enclave and persuade the Protectorat to grant them refuge from the wasteland. In Gaia's absence, the Enclave has grown more cruel, more desperate to experiment on mothers from outside the wall, and now the stakes of cooperating or rebelling have never been higher. Is Gaia ready, as a leader, to sacrifice what--or whom--she loves most?

What did I think of it:
This is my least favorite book in this trilogy.

Just as in book two there is a lot of beard shaving going on. Beards get shaved off left and right.

I thought Gaia was acting very selfish. She made her choice in the love square that was going on, but when the jilted lovers try to move on and find love somewhere else Gaia gets all huffy and possessive about it, wanting them to pine after her forever.

And don't even get me started about how naive and gullible Gaia was. I'd have thought she learned to be a bit more cautious after everything she encountered.

But what bothered me most was the moralizing. This book has a message to tell and almost shouts it to its readers. I must confess that I didn't think some of the things the Protectorat is doing were that evil, but Gaia thinks otherwise and her voice drowns out all other opinions in favor of her own. It was a clear difference from the second book where Gaia often had a different opinion than others, but at least respected other opinions and decisions.

The lecturing tone of this book really diminished my enjoyment of the story and I must say I had trouble finishing it. All in all it is a very different read than the first two books and I don't think I'll reread this one. I will reread the other two though and I will most probably try other books by O'Brien.

Why should you read it:
It's an interesting Dystopian YA read.

Lol about the beard shaving warning. My boyfriend recently started a small one, and I just wish he shaved it!