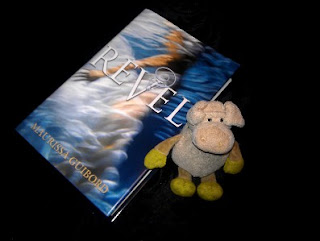 What is it about:
There’s an island off the coast of Maine that’s not on any modern map.

Shrouded in mist and protected by a deadly reef, Trespass Island is home to a community of people who guard the island and its secrets from outsiders. Seventeen-year-old Delia grew up in Kansas, but has come here in search of her family and answers to her questions: Why didn’t her mother ever talk about Trespass Island? Why did she fear the open water? But Delia’s not welcome and soon finds herself enmeshed in a frightening and supernatural world where ancient Greek symbols adorn the buildings and secret ceremonies take place on the beach at night.

Sean Gunn, a handsome young lobsterman, befriends Delia and seems willing to risk his life to protect her. But it’s Jax, the coldly elusive young man she meets at the water’s edge, who finally makes Delia understand the real dangers of life on the island. Delia is going to have to fight to survive. Because there are monsters here. And no one ever leaves Trespass alive.

What did I think of it:
This was a nice read.

I must confess I had expected more from this book.

The premise sounds really intriguing and promises a creepy story. I can't say I thought this book was creepy though. It's an interesting story, but it lacked an emotional impact in my opinion. There was no real suspense or surprises along the way.

I also think the town of Trespass didn't feel real. For a community that's been mostly cut-off from the world for a long time I thought the people felt too modern in their way of talking and behaving. But maybe I'm overthinking things here.

These flaws aside this is a pleasant and enjoyable read with some really nice world building though and I might give other books by Guibord a try when I come across them.

Why should you read it:
It's an enjoyable YA read.