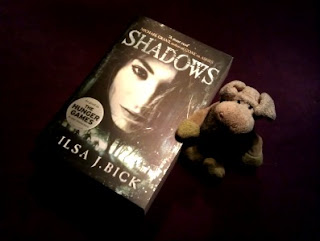 What is it about:
The Apocalypse does not end. The Changed will grow in numbers. The Spared may not survive.

Even before the EMPs brought down the world, Alex was on the run from the demons of her past and the monster living in her head. After the world was gone, she believed Rule could be a sanctuary for her and those she’d come to love.
But she was wrong.

Now Alex is in the fight of her life against the adults, who would use her, the survivors, who don’t trust her, and the Changed, who would eat her alive.

What did I think of it:
I will say I was a bit annoyed by the message printed on the cover that promised me this book was as good as The Hunger Games. Now I have nothing against The Hunger Games, it's a nice enough read, but I absolutely loved Ashes, the first book in this trilogy, and was really hoping Shadows was just as good as Ashes and thus way better than The Hunger Games. (Also: don't print stuff like that on the cover! Make a sticker so I can remove it.)

Luckily for me this book is not as good as The Hunger Games though:
It's so much better!

Ashes was told through Alex's viewpoint, but this book has multiple viewpoints. It threw me at first, but soon I was gripped by the gritty and dark story and was cheering on most of the characters.

The story is complex and I liked how all the different storylines slowly lead to each other and intertwine. The one thing I can say against this story is that once again the lead heroine (Alex) survives a couple of times through being 'special', but apart from those minor flaws this is an awesome post-apocalyptic adventure with lots of grim and gruesome moments. I like how Bick shows that humans can be just as scary and dangerous (if not even more so) as flesh eating monsters.

The ending is a major cliffhanger, leaving so many things open and questions unanswered that I wanted to go out and get the last book right away. Sadly enough I will have to wait until September though. So I'll have to comfort myself by rereading Ashes and Shadows while waiting and I will most certainly give other books by Bick a try as well.

Why should you read it:
It's grim and gritty Post-Apocalyptic awesomeness

Wonderful! So glad it turned out better than hoped. :) Thank you!

Messages like that can totally make me turn down a book. Compare it to twilight? And no sale.
Glad you loved it :)