Today I have a guest:
Kellie Sheridan, author of Mortality (book one of The Hitchhiker Strain) as well as End Dayz (a prequel to Mortality).

Kellie is here to talk about the zombies in her books so sit back and read all about them.

Don't forget to check out the description of Mortality at the end of this post and visit the buy links. Starting today there's a 40% sale on the Mortality ebook on Amazon and Smashwords, to celebrate this weekends season finale of The Walking Dead so don't miss out! 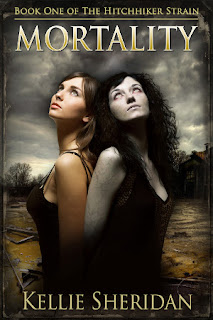 Designing My Zombies by Kellie Sheridan

When I first decided to write a book set after the zombie-apocalypse, I was faced with the age-old question. Fast zombies or slow zombies? It’s a question that’s been plaguing (heh) the genre almost since its inception.

Slow zombies make a bit more sense (as much as any of this does) in that they’re decaying and sometimes half-eaten—those things can’t run! They also have a better chance of sneaking up on their intended victims, if they can manage to keep the moaning to a minimum. My problem, is that I never really believed that these creatures who are physically inferior and driven by instinct could really decimate the entire planets population.

That’s where fast zombies come in. If you’re not careful, a swarm of these guys can overwhelm you in a matter of seconds. Just look at trailers for the upcoming zombie movie World War Z (although really, you should just read the book on this one) to get an idea of what these guys can do. There’s no question that if fast zombies ever became a thing, we’d be pretty much toast. The problem is that these zombies are usually faster than they ever were when alive. Dying robs you of your intellect but gives you super human strength? That’s hard to believe, even for genre fans. It comes off as a convenient way to ramp up the threat. I need science in my science fiction! 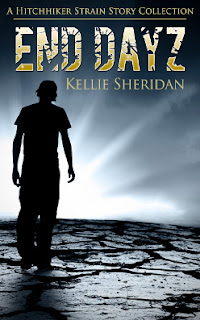 So what’s the answer? Well, there isn’t just one. Every incarnation of zombies has to tackle this in its own way. I decided to find a way to incorporate both. In Mortality, you get to see the aftermath of the zombie infection as well as those first days of terror when the dead began to walk. And at first, that’s what I did. My first zombies were slow and flesh-hungry, so those were Mortality’s first zombies as well.

But because they weren’t terribly quick and the infection started in one central area, we were able to get them (mostly) under control. The American government even managed to come up with a vaccine in record time. Great! Not so great. Due to some poor planning that I won’t get into here for fear of spoilers, things go all kinds of wrong and a second generation of the infected is created. The vaccine isn’t able to stop the zombie-infection, only slow it down long enough to stop it from killing the bitten. Now there are two kinds of Z on the prowl, one who is slow and decaying and another that possess all our physical strengths but is driven only by hunger—uber Zs. Ack!

So, how do these two types of zombies manage to co-exist? Well I wouldn’t call it peaceful, but I’ll leave you to read Mortality to get all the gory details!

After surviving a deadly plague outbreak, sixteen-year-old Savannah thought she had lived through the very worst of human history. There was no way to know that the miracle vaccine would put everyone at risk for a fate worse than un-death.

Now, two very different kinds of infected walk the Earth, intent on nothing but feeding and destroying what little remains of civilization. When the inoculated are bitten, infection means watching on in silent horror as self-control disappears and the idea of feasting on loved ones becomes increasingly hard to ignore.

Starving and forced to live inside of the abandoned high school, all Savannah wants is the chance to fight back. When a strange boy arrives with a plan to set everything right, she gets her chance. Meeting Cole changes everything. Mere survival will never be enough 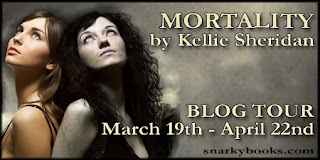 This sounds like a very interesting book. Thanks for bringing it to my attention by having Kellie here today, Sullivan. And thanks for stopping by, Kellie. =o)

Sullivan, thank you so much for hosting this fantastic tour stop!

I always love stopping by your blog.

love the sounds of this series. i MUST read ;-)