The Seduction of Phaeton Black - Book Review by Voodoo Bride 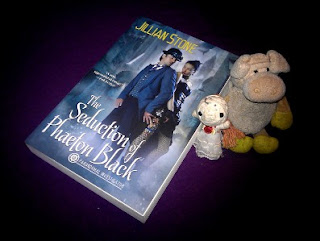 The Seduction of Phaeton Black (Paranormal Investigator #1)
by Jillian Stone

What is it about:
The year is 1889 and Queen Victoria, exemplum of decency and sobriety, is in her fifty-second year of reign. Occult detective Phaeton Black, on the other hand, couldn’t be less interested in clean-living. He has recently taken up residence in the basement flat of London’s most notorious brothel. A dedicated libertine with an aptitude for absinthe, he wrestles with a variety of demons both real and self-inflicted.

Unfairly linked to Scotland Yard’s failure to solve the Whitechapel murders, Phaeton is offered a second chance to redeem himself. A mysterious fiend, or vampire is stalking the Strand. After a glass and a consult with the green fairy, he agrees to take on the case.

On his first surveillance, Phaeton pursues an elusive stranger and encounters several curious, horrifying beings. But the most intriguing creature of all is a Cajun beauty who captures him at knifepoint and threatens to spirit away his heart.

What did Voodoo Bride think of it:
This book is marketed as Steampunk, but I would call this a Historical Paranormal Romance. A Victorian setting and one airship aren't enough for me to call a book Steampunk.

This is a surprisingly hot and enjoyable read.

I must say I was a bit flabbergasted by the first encounter between Phaeton and America, even though I was warned this book was heavy on the steamy scenes. It was a highly unusual first meeting I can tell you.

Phaeton is a hero who had to grow on me, but I liked America from the start and once I got used to Phaeton I very much enjoyed both the story and the romance. I did think that the story was divided into two storylines unnecessarily. I would have liked it more if America's storyline was part of the investigation Phaeton was conducting, but Stone's writing and the romance were good enough to go along with how the story was set up.

The ending of this book was very satisfying, giving a conclusion for now, but hinting at many more adventures and I might pick up the next book in this series to see if it's as enjoyable as this one.

Why should you read it:
It's a steamy Historical Paranormal Romance.

I've really been wanting to read this series. I'll just have to skip the too hot scenes to get back to the story itself :)

I'm so happy you liked it, it's a really nice series!

I always wonder with books labeled steampunk if it is. Thanks for sharing that on this one. I like hearing that. And glad you hear you enjoyed it too. :)

Thanks for your comments everyone.