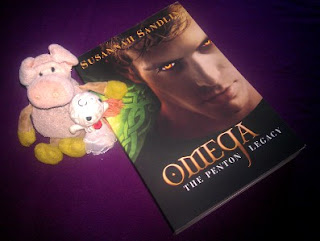 What is it about:
The bloody war between the Vampire Tribunal and the defiant scathe of Penton, Alabama, rages on, forcing its residents and their bonded humans to retreat into the underground fortress of last resort: Omega. There, Will Ludlam is charged with the care of Penton’s humans, though he longs to fight alongside his vampire brethren. He knows the risks: as the renegade son of the Tribunal’s vicious leader, Will’s capture could doom the resistance. Yet he is determined to prove his worth to his adopted scathe, to his vengeful father—and to former US Army officer Randa Thomas, his beautiful, reluctant partner. Randa has little faith that a former member of the vampire elite has what it takes to fight a war. But as their enemies descend upon Omega, Will’s polished charm—and Randa’s guarded heart—finally give way to the warrior within.

What did Voodoo Bride think of it:
I will confess I had my doubts about this book.

I loved the first two books in this series and the overall storyline and I was dying to read how it all would end in this last installment. I didn't much like Will in the first two book though and he's the hero of Omega, so I was worried if I'd like the romance.

Will turns out to be a complex character with hidden depths and Sandlin managed to make me fall in love with him. I also really liked Randa. She's strong and stubborn, but willing to accept she's wrong about things from time to time. The romance between the two was a delight to read.

The action storyline was just as intense as I had expected it to be after the events in the first two books and doesn't disappoint. This is a suspenseful and action packed read that I couldn't put down until I finished it. A perfect conclusion to the trilogy.

I will reread this trilogy for sure and I will keep an eye out for more books by Sandlin. I understand she will write at least one spin-off to this series and you can bet I'll be getting my hands on that.

Why should you read it:
It's a romantic and suspenseful Paranormal Romance

Great review Sullivan! I have promised myself I will start this series this month. I do have the first two books on my shelves. I love her alter ego Suzanne Johnson's books a lot.

I'm glad you enjoyed this one as well. It was a really nice book.