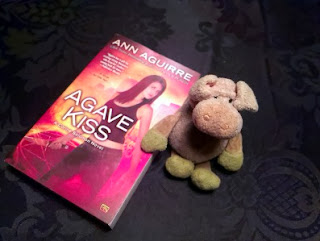 What is it about:
Chance was gone; he’d sacrificed himself so Shannon and I could escape Sheol. We’d raised him on Shan’s spirit radio, which meant his soul wasn’t wholly destroyed by the demon gate….

Once Corine Solomon only had the touch—the ability to read an object’s past by handling it. Then she inherited her mother’s magick, and that ended up being a hell of a burden. But if Corine can wrestle a demon queen and win, she can bring back her lover Chance after he’s made the ultimate sacrifice. Can’t she? All Corine knows is that she can’t leave Chance behind if there’s anything she can do about it.

But the clock is ticking—and she still has to deal with debt-collecting demons and a maniacal archangel who’s running a recruitment drive. The stakes have never been so high…and this time it’s truly Corine’s last chance to save the love of her life.

What did I think of it:
I have a confession to make.

I'm a big Ann Aguirre fan, I really love this series, but... I never liked Chance.

I know! He's the main love interest in this series, and knowing Ann Aguirre's thoughts about endings I knew where this series would lead to, so I knew I shouldn't hold hope for a certain other character. Still I did!

That's the power of Aguirre's writing: You get gripped by the story and forget about everything else. This book made me hope, fear and cry. It's a fitting, bittersweet ending of a great series.

I loved how there was a story line revolving around Booke, a character that has showed up throughout the series as a minor supporting character. It was cool to see him take the stage for once.

All in all this is a great, compelling and intense book, and I was both happy with the conclusion and sad to have to say goodbye to this series. I will most certainly reread it in the future.

Why should you read it:
It's an intense and awesome Urban Fantasy read.

This is exactly the sort of cover I was talking about--that instantly makes me not want to read the words inside of it. So always good to hear from someone who has actually seen the words inside...

I have to agree this series doesn't have the best covers, but at least it's not a bare chested hero cover *shudders* :-p

Lol you can always give me your books with bare chested or shouldered hero's on them ;)
Glad you loved the book Sulli, one day I will read this series as well.