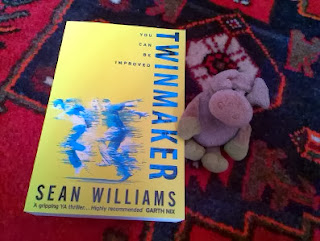 In a near-future world in which technology can transport you anywhere instantly, can a coded note enable you to change your body—to become taller, stronger, more beautiful? Clair is pretty sure the offer is too good to be true. But her best friend, Libby, is determined to give it a try, longing for a new, improved version of herself.

What starts as Libby’s dream turns into Clair’s nightmare when Libby falls foul of a deadly trap. With the help of Jesse, the school freak, and a mysterious—but powerful—stranger called Q, Clair’s attempt to protect Libby leads her to an unimagined world of conspiracies and cover-ups. Soon her own life is at risk, and Clair is chased across the world in a desperate race against time.

Action and danger fuel Sean Williams’ tale of technology, identity, and the lengths to which one girl will go to save her best friend.

The future world that is imagined in this book felt a bit unbelievable to me. It didn't feel as if it was thought through. I saw lots of problems and ways to manipulate the technology that is used. Then I found out this story is mainly about manipulating the technology and I felt a bit cheated. If I can see the things that can go wrong, surely more people than just a few would have seen it as well in that future world. It seemed to me that Williams didn't perfect his world, so he could write the story.

That annoyance aside, I did enjoy the story.

Clair starts out as an average teenager, but the things that are happening, change her, and it was fun to see her growth. I also really liked Jesse. He's not the typical pretty boy with muscles and charm you see in most YA, instead he's an outcast geek.

The story is suspenseful and full of action. There were some things I frowned at: Clair is too trusting at certain moments, while she's suspicious at others, and I figured out some things long before it was revealed. Still this book was entertaining enough that I didn't mind. The ending makes that this book can be read as a standalone, but also leaves enough open to make people curious what will happen next.

I might give the second book a try if I run into it.

Why should you read it:
It's an enjoyable and entertaining Dystopian YA read.

It sure sounds different, glad you enjoyed it.