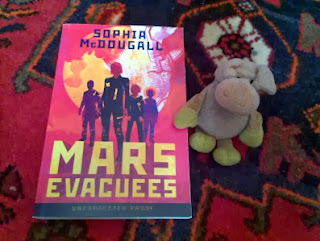 What is it about:
The fact that someone had decided I'd be safer on Mars, where you could still only sort of breathe the air and sort of not get sunburned to death, was a sign that the war with the aliens was not going fantastically well. I'd been worried that I was about to be told that my mother's space fighter had been shot down, so when I found out that I was being evacuated to Mars, I was pretty calm. And, despite everything that happened to me and my friends afterwards, I'd do it all again. Because until you have been shot at, pursued by terrifying aliens, taught maths by a laser-shooting robot goldfish and tried to save the galaxy, I don't think you can say that you've really lived. If the same thing happens to you, this is my advice: Always carry duct tape.

What did I think of it:
This is a fun read.

Even though this book is aimed at the age group 8 to 12, it's a great read for older readers as well. I for one was greatly entertained and couldn't put this book down until I finished it. The writing is fast paced and humorous, and the world building and descriptions fit into the narrative perfectly.

Alice Dare, the lead character, is a twelve year old girl, who gets send to Mars with other children and teens to be away and out of danger from the aliens that are slowly taking over the earth. Once on Mars her troubles are far from over though, and the reader gets taken along on a fun, action-packed adventure.

I like how this book tackles subjects like bullying, working together and tolerance without it being an obvious lesson or learning experience. McDougall integrates these things into the story seamlessly and lets the readers draw their own conclusion.

All in all this is a great read and I will keep an eye out for a sequel.

Why should you read it:
It's a fun SciFi adventure.

Lol for the Duct tape.