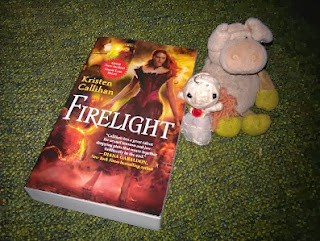 What is it about:
Once the flames are ignited . . .

Miranda Ellis is a woman tormented. Plagued since birth by a strange and powerful gift, she has spent her entire life struggling to control her exceptional abilities. Yet one innocent but irreversible mistake has left her family's fortune decimated and forced her to wed London's most nefarious nobleman.

Lord Benjamin Archer is no ordinary man. Doomed to hide his disfigured face behind masks, Archer knows it's selfish to take Miranda as his bride. Yet he can't help being drawn to the flame-haired beauty whose touch sparks a passion he hasn't felt in a lifetime. When Archer is accused of a series of gruesome murders, he gives in to the beastly nature he has fought so hard to hide from the world. But the curse that haunts him cannot be denied. Now, to save his soul, Miranda will enter a world of dark magic and darker intrigue. For only she can see the man hiding behind the mask.

What did Voodoo Bride think of it:
This is a nice read.

I will confess I have a weakness for stories that use the Beauty and the Beast theme. In fact A Rose in Winter by Kathleen E. Woodiwiss was one of the first romances I ever read. So I was excited to pick up Firelight, which promised a similar theme.

Sadly enough Firelight doesn't deliver on the romance for me. It missed bite, and it missed the tension I want from a good Beauty and the Beast story. I wanted more conflict and more darkness.

The overall paranormal storyline was entertaining though, and the story was well written, so even though I didn't connect with Archer and Miranda this was an enjoyable read. I might give the next book in this series a try if I come across it, but I won't be hunting it down.

Why should you read it:
It's a nice Historical Paranormal Romance.

Finally, someone who agrees with me. I was not blown away by this book, did not like the characters much, and the paranormal surprise in the end was not enough to keep me motivated.

I haven't read them, but I got three books in that series. B&B is one of my favorite memes. One day I will read them.

Oh I'm sorry it wasn't what you expected

Can't win them all ;-)
It was nice, I just expected more bite.