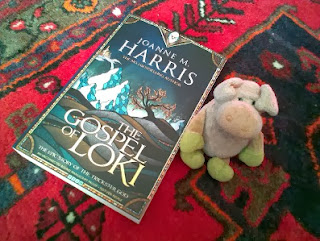 The Gospel of Loki
by Joanne M. Harris

What is it about:
Loki, that’s me.

Loki, the Light-Bringer, the misunderstood, the elusive, the handsome and modest hero of this particular tissue of lies. Take it with a pinch of salt, but it’s at least as true as the official version, and, dare I say it, more entertaining.

So far, history, such as it is, has cast me in a rather unflattering role.

Now it’s my turn to take the stage.

With his notorious reputation for trickery and deception, and an ability to cause as many problems as he solves, Loki is a Norse god like no other. Demon-born, he is viewed with deepest suspicion by his fellow gods who will never accept him as one of their own and for this he vows to take his revenge.

From his recruitment by Odin from the realm of Chaos, through his years as the go-to man of Asgard, to his fall from grace in the build-up to Ragnarok, this is the unofficial history of the world’s ultimate trickster.

What did I think of it:
I fell in love with the way Harris writes Loki in Runemarks, so I was more than eager to get my trotters on The Gospel of Loki, which is a retelling of the Norse myths, but from Loki's point of view. Imagine my excitement when I managed to get hold of an Advance Reader Copy of The Gospel of Loki, and get it signed by Joanne Harris as well!

This book is so good!

I've always wondered why Loki is painted as plain evil most of the time, while his Shakespearian alter ego Puck gets to keep the ambiguous status that, in my opinion, is the heart of Loki: neither good or bad, he's chaos after all. He's trickster, prankster and even a bit of a clown.

Harris understands this perfectly and shows Loki as I see him. Her writing is both fun and funny and even while a lot of the stories were familiar for me, I enjoyed reading them and seeing them from Loki's point of view. Harris manages to make you understand Loki, loathe those Gods who are mean to him, and root for Loki to succeed in his plans.

All in all this book is even better than I hoped it would be and I will most certainly reread it often. And reading this book has made me even more eager to read Runelights, the sequel to Runemarks, and which also features Loki.

I can advice this book to everyone who loves retellings of old myths and to anyone who ever thought Loki wasn't getting a fair treatment.


Why should you read it:
It's a funny and cool retelling of Norse Myths.

so which book should I read first?

YAY! I know you like Loki's book. You know I thought of you when I read Wild Card because gods are here and even Loki and he is different and nice for one. Well... nice is a big word but he isn't the big bad boy.

@Melliane: Oh, will have to check it out

O great review, now I want to read this book, especially as the movie Thor is on the agenda for this weekend ...