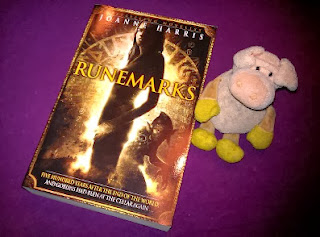 What is it about:
Seven o'clock, on a Monday morning, five hundred years after the end of the world, and goblins had been at the cellar again...

Maddy Smith was born with a rusty-coloured runemark on her hand - a symbol of the old gods and definitely cause for suspicion. For magic is dangerous. Or so everyone thinks. But Maddy enjoys working magic. Even if it is just to control some pesky goblins. And every time her friend, One-Eye - a good-for-nowt Outlander - comes by, he teaches her more and more about the gods and the runes. Now he wants Maddy to open Red Horse Hill and descend into World Below to retrieve a relic of the old gods. Otherwise it is likely to be the End of Everything.

What did I think of it:
This is a really great read.

For anyone familiar with the Norse mythology it will not come as a surprise who Maddy's one-eyed friend is of course, but that only made me more curious to read the book, to see how Harris uses Norse mythology in her book.

And she does this wonderfully. I was pleasantly surprised to find she has much the same view of the Norse gods as I do, and this made the already very cool and suspenseful story even more enjoyable.

The point of view switches from Maddy to some of the other characters and this gives you a greater insight in what's going on. And there's a lot going on! Maddy is being used by multiple people and has to figure out who she can trust and who might stab her in the back.

I also really liked the new world order Harris created. The Order, which rules the world, is a sinister and mysterious organisation with it's own agenda. Next to using magic it's also forbidden to dream, which created a scary world in my opinion.

All in all this is a wonderful story, filled with intrigue, adventure and suspense. It can easily be read as a standalone, but you can bet I will be reading the sequel.

Sounds good. Always a sucker for Norse gods. Has to do with my real name.
I'll keep this one in mind

Nice review Sullivan, this sounds like a good one. If only it was adult ... then I would have perhaps bought it on the spot.