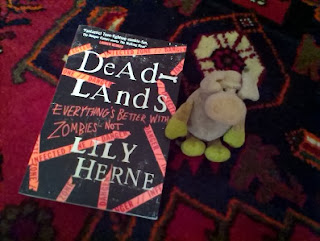 What is it about:
Ten years after Cape Town was destroyed in the War with the living dead, zombies ramble free in Cape Town's suburbs (known as the Deadlands), and the remaining living are either in fenced in on farms or in urban shantytowns.

The living are watched over by the mysteriously robed Guardians, a race of humanoid figures who appeared at the end of the War and who keep the living dead at bay, albeit for a steep price. Every year the Guardians stage a human Lottery and select five aspiring teenagers to be whisked out of the enclave for a secret purpose. To be one of the chosen five is a highly sought after and prestigious accolade.

No one (yet) knows why it is that the Guardians prize teenage bodies so highly, how they control the zombies or what they look like under the robes that cover their bodies...

What did I think of it:
This is a nice zombie read.

I was excited to see it was set in Cape Town and had high hopes for this setting, but apart from some of the language that was used, it felt like any other post apocalyptic setting and the story could just as well have been set in any other town.

That aside: the story is intriguing and I really liked Lele, the lead character. She's chosen as one of the teenagers to be handed over to the Guardians, but instead of going along, she escapes and takes her chances outside of the safety of the compound. She's stubborn and brave, two qualities that get her in trouble, but also make for a cool story.

The people she meets are also very interesting, and when Lele and some of the other characters clashed, I could understand both sides. It was hard at times to decide who to root for.

There's lots of mystery and intrigue and I kept guessing and wondering what was going on, especially as some things that happened, felt a bit convenient, and I wanted to know if it was lazy writing or if it had a explanation in the story. Luckily it turned out to be the latter.

This book can be read as a standalone, but also leaves enough open to make me curious what will happen next and what secrets will yet be uncovered. I will most probably pick up the next book when I come across it.

Why should you read it:
It's an enjoyable YA zombie read.

Nice review, would I be wrong if I guessed what was under those robes based solely on the blurb?

This blurb is indeed a bit more spoilery than the one on the back of my book.