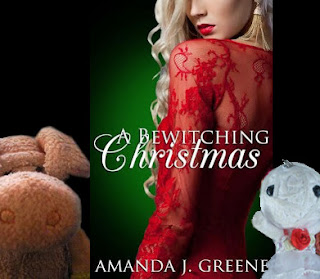 A Bewitching Christmas (Under Realm Assassins #1)
by Amanda J. Greene

What is it bout:
It has been seven years since Analette Dyson stopped practicing magic and headed to New York, where she created a new life, complete with a fabulous job, an apartment in Central Park West, and a sexy werewolf fiancé. She never planned on returning to her small home town in Maine, but when she learns her grandmother is ill, she decides to pop over for a visit and what better time than Christmas? Excited for her fiancé to meet her family, they head up a day early.

After doing some last minute Christmas shopping, Analette returns to their hotel to find her fiancé in bed with another woman. Cursing the universe for her never ending bad luck with men and dreading telling her family about her cheating fiancé, she heads to the bar to self medicate.

Not one to celebrate the holidays, vampire and assassin, Cole McRae, has followed a lead to a rustic town in witch territory. But after a few days of research and waiting for his target to show, he begins to suspect he has wasted his time. That is, until he meets a curvaceous blonde with bewitching green eyes at the local bar. One night with the enchanting Analette could make this useless trip well worth his time.

Their passion is undeniable and unbeknownst to them, their fates are intertwined. Magic and romance will strike on Christmas, changing their lives forever.

What did Voodoo Bride think of it:
This is a hot Christmas romance.

Analette and Cole are introduced to the reader, they meet, and soon after they indulge in a steamy one-night-stand. The morning after they discover they have to work together to make it to Christmas alive. Can they turn lust into love?

I loved the steamy scenes between Ana and Cole. They were deliciously hot. The story that followed after their one-night-stand was really enjoyable. There was some suspense, but mostly it was about Ana and Cole connecting on a less physical level.

The world building was very intriguing. I think this novella works very well as a standalone, but it's a perfect way to introduce readers to the setting and get them interested in the Under Realm Assassins series as well. I know I am more than tempted to read more in this series.

All in all this is both a hot and sweet read that I can advice to anyone who's looking for a Paranormal Christmas read.

Why should you read it:
It's a steamy holiday read.