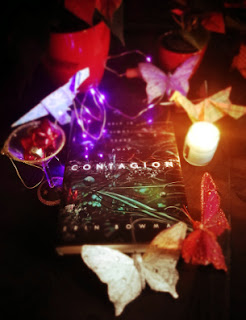 What is it about:
After receiving a distress call from a drill team on a distant planet, a skeleton crew is sent into deep space to perform a standard search-and-rescue mission.

When they arrive, they find the planet littered with the remains of the project--including its members' dead bodies. As they try to piece together what could have possibly decimated an entire project, they discover that some things are best left buried--and some monsters are only too ready to awaken.

What did I think of it:
I love it when a book is even better than I hoped it would be.

When I heard about this book it was pitched as 'Alien meets Outbreak'. Enough for me to preorder and beg some preorder goodies off Bowman. So when the book arrived I had a signed bookplate to put in the book and a matching bookmark.

And what an awesome read this is!

A small group based on a research base is ordered to investigate a distress call, because they're closest to the planet it originates from. As soon as the team arrives on the planet it is clear something went terribly wrong. Pleas to stay on the ship and wait for backup are ignored by the captain and the crew disembarks to investigate. There are several viewpoint characters, all with their own secrets and dreams.

I was hooked from the start. Strange and creepy things have been going on, and slowly the rescue team discovers what transpired, and they start to realize they might be in danger as well. The building tension and suspense is really well done. I was on the edge of my seat and couldn't put this book down. Each new discovery racked up the creepy atmosphere and made me fear for my favorite characters.

As the story unfolds there are some really brutal action-scenes, cool revelations, betrayal, and more. As I said: I had high hopes for this book and it totally delivered.

The ending was very satisfying in my opinion, even though it's clear there's lots more to come. And you can bet I'll be getting my greedy trotters on the second book, because I want and need more!

Why should you read it:
Alien meets Outbreak! Need I really say more?