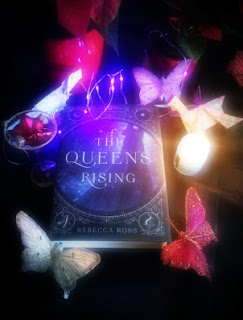 The Queen's Rising (The Queen’s Rising #1)
by Rebecca Ross

What is it about:
When her seventeenth summer solstice arrives, Brienna desires only two things: to master her passion and to be chosen by a patron.

Growing up in the southern Kingdom of Valenia at the renowned Magnalia House should have prepared her for such a life. While some are born with an innate talent for one of the five passions—art, music, dramatics, wit, and knowledge—Brienna struggled to find hers until she belatedly chose to study knowledge. However, despite all her preparations, Brienna’s greatest fear comes true—the solstice does not go according to plan and she is left without a patron.

Months later, her life takes an unexpected turn when a disgraced lord offers her patronage. Suspicious of his intent, and with no other choices, she accepts. But there is much more to his story, and Brienna soon discovers that he has sought her out for his own vengeful gain. For there is a dangerous plot being planned to overthrow the king of Maevana—the archrival kingdom of Valenia—and restore the rightful queen, and her magic, to the northern throne. And others are involved—some closer to Brienna than she realizes.

With war brewing between the two lands, Brienna must choose whose side she will remain loyal to—passion or blood. Because a queen is destined to rise and lead the battle to reclaim the crown. The ultimate decision Brienna must determine is: Who will be that queen?

Brienna starts studying at Magnalia House when she is ten. She knows she is a bit of a charity case, which makes her want to succeed all the more when she finally decides on the passion she wants to master: knowledge. Little does she know what fate has in store for her.

I loved the idea of the passions: one subject that is studied until mastered. Once this is done a student is sought after by patrons. If there's one thing I could say against this book, is that I wished the part about Brienna's studies had been longer. I'd have easily read a book just about Magnalia House alone.

Luckily the intrigues Brienna gets involved in after she leaves Magnalia House are just as fascinating as her studies. I had to keep reading to find out what she got herself into and if she would get out unscathed. I worried at times she might have allied herself with people who didn't deserve her trust.

Next to a very suspenseful main storyline full of secrets, danger, and possible betrayal there is a very subdued, but beautiful romance storyline, but it's Brienna's search for truth and a place to belong that takes the stage in this beautifully written Fantasy.

The ending is satisfying and makes this book perfectly readable as a standalone. Knowing there will be more books in this series however, makes that I'll eagerly await the next book.

Why should you read it:
It's a beautiful Fantasy read.