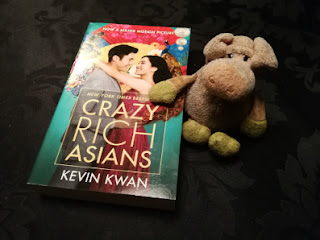 What is it about:
Crazy Rich Asians is the outrageously funny debut novel about three super-rich, pedigreed Chinese families and the gossip, backbiting, and scheming that occurs when the heir to one of the most massive fortunes in Asia brings home his ABC (American-born Chinese) girlfriend to the wedding of the season.

When Rachel Chu agrees to spend the summer in Singapore with her boyfriend, Nicholas Young, she envisions a humble family home, long drives to explore the island, and quality time with the man she might one day marry. What she doesn't know is that Nick's family home happens to look like a palace, that she'll ride in more private planes than cars, and that with one of Asia's most eligible bachelors on her arm, Rachel might as well have a target on her back. Initiated into a world of dynastic splendor beyond imagination, Rachel meets Astrid, the It Girl of Singapore society; Eddie, whose family practically lives in the pages of the Hong Kong socialite magazines; and Eleanor, Nick's formidable mother, a woman who has very strong feelings about who her son should--and should not--marry. Uproarious, addictive, and filled with jaw-dropping opulence, Crazy Rich Asians is an insider's look at the Asian JetSet; a perfect depiction of the clash between old money and new money; between Overseas Chinese and Mainland Chinese; and a fabulous novel about what it means to be young, in love, and gloriously, crazily rich.

What did I think of it:
People were raving about the movie based on this book, so that's why I decided to give the book a try.

I might have to try the movie, because although there were fun parts in this book, and I really liked Rachel and Nick, most the people in this book were total dicks (women included).

I kept reading to see if things would work out for Rachel and Nick, but it only got worse and worse. While intrigued by the world of the Asian JetSet I despised the characters and their pettiness. The ending made up just a little bit for all the shit thrown Rachel's way, but left me mostly frustrated and unsatisfied.

As I said: I might try the movie, but no way am I going to continue reading this series.

Why should you read it:
It has its moments.

That's pretty much how the movie is, too - the people were so mean-hearted! Except for her friend, who was fab and hysterical.

Hmm.. I might skip the movie in that case. There are enough jerks in real life already, I don't need to seek them out in movies.